Burt Reynolds’ hospitalization is the result of the terrible flu that is going around this year. The 76-year-old actor is just one of many Hollywood stars who’ve had to battle the bug. 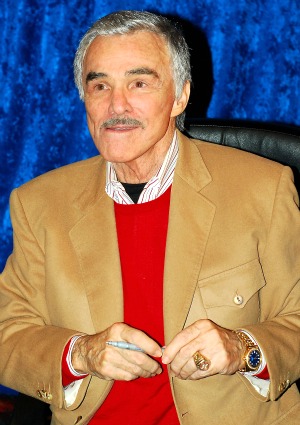 Burt Reynolds remains hospitalized in Florida, where he is being treated for complications from the flu.

A rep for the 76-year-old confirmed the actor came down with the virus so many have battled, but wasn’t able to beat the bug on his own. As Reynolds’ symptoms worsened, he was taken first to the hospital and then later moved into the intensive-care unit.

TMZ reports that Friday the Boogie Nights actor was moved to the ICU after doctors determined he was “severely dehydrated.” Thankfully, doctors are optimistic the much-loved, mustachioed actor will make a full recovery.

“He is doing better at this time,” a rep told CNN about Reynolds, who is pictured here at a signing in 2011. “We expect, as soon as he gets more fluids, he will be back in a regular room.”

Television and movie fans likely recall that the flu was a hot topic earlier this month at the Golden Globe Awards. Hugh Jackman, who won Best Actor for his Les Miserables role, began his acceptance speech by saying, “Sorry, I’m at the tail end of this flu and I was kicking myself for not getting the flu shot… but it appears actually you don’t need one. I feel great!”

Check out tips on keeping your family safe from the flu >>

Golden Globe winner Jennifer Lawrence also said she was sick with the flu, telling Ryan Seacrest, “I don’t want to shake your hand, I have the flu. Sorry!”

Meryl Streep, whom Lawrence beat out for the award, missed the ceremony entirely because she, too, was ill.

No word yet on if Reynolds, who will celebrate birthday 77 on Feb. 11, took Hugh Jackman’s advice and skipped this year’s flu shot, or not.

Leave your well-wishes for Burt Reynolds’ recovery below!