The late-night publicity stunt in which Matt Damon hijacked Jimmy Kimmel’s show turned into a huge ratings success for the show. 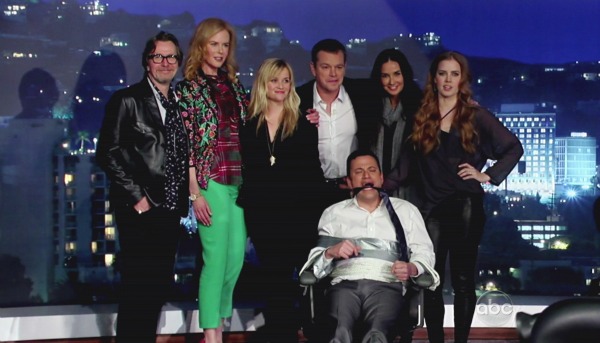 On Thursday night, it looked like the years of Jimmy Kimmel‘s famous farewell quote, “Sincere apologies to Matt Damon, we ran out of time for him tonight. We will get him on the air soon,” finally caught up with him.

Kimmel’s show was hijacked by Damon himself. Instead of the usual show opening, every guest and musical artist was named “Matt Damon.” Instead of watching Jimmy Kimmel Live, the audience was watching “Jimmy Kimmel Sucks.”

The Promised Land actor opened with a hilarious monologue that roasted the funnyman with jabs like, “Hey… just for starters, let me ask you guys this, as an audience is it weird to see a person with actual talent host this show?”

While this was happening, Kimmel was duct-taped to a rolling office chair in the background with his tie stuffed into his mouth.

Damon put his own stamp on the show, calling in reinforcements like fellow Good Will Hunting star Robin Williams to finish out the monologue and “upgrading” Kimmel’s staff by making musician Sheryl Crow the evening’s bandleader. He also had Andy Garcia step in as the talk show sidekick.

The star-studded evening continued with Nicole Kidman as the first guest. In a move totally out of her usual prim and proper self, the actress gave the bound and gagged Kimmel a little lap dance.

When Damon mentioned she’s never done the show before, Kidman responded, “He’s just not classy.” The audience roared with laughter.

The parade of stars kept on coming, with Reese Witherspoon, Gary Oldman, Demi Moore, Amy Adams and even Ben Affleck making an appearance as the cue card guy, all while Kimmel remained in the background as his show rolled on.

The publicity stunt proved to be a huge ratings success, giving the show its highest share ever in their new 11:35 p.m. time slot. According to the official press release, the show even beat The Tonight Show with Jay Leno by 62% and The Late Show with David Letterman by 120% in the coveted 18-49-year-old demographic.

Damon had been bumped from Kimmel’s chat fest 1,205 times over the last decade. Perhaps the hijacking stunt was the key to late-night success.