Is the romance back on for Marc Anthony and Jennifer Lopez? The 44-year-old actor, record producer and singer confirms split with girlfriend as rumors swirl. 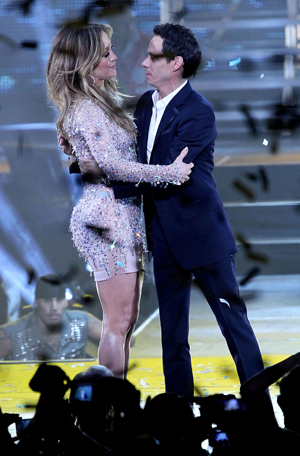 Marc Anthony filed for divorce from Jennifer Lopez in 2012, but if the gossip about the pair is correct, things may be on again.

Anthony has been dating model Shannon de Lima for about a year, but Anthony’s spokesperson confirmed that the “amicable breakup became official right in mid-January.”

This despite being spotted in hot New York club Marquee on Jan. 16. The U.K.’s Daily Mail reported that a source saw de Lima “dancing up a storm with her friends while sipping champagne and taking iPhone photos of themselves and the light show.”

At one point, “Shannon even jokingly gave Marc a lap dance when Pitbull came on.”

Girl’s a Pitbull fan, who isn’t?

Nonetheless, it seems like days or moments later the two broke up. Complicating matters are reports that Anthony was seen leaving Lopez’s room at NYC’s The Mark hotel this week.

As the New York Post‘s Page Six reports, Lopez left her boyfriend, back-up dancer Casper Smart, back home in Los Angeles when she came to New York for the premiere of her new movie Parker.

At first she stayed at Manhattan’s London Hotel, but on Tuesday of this week, she moved over to The Mark, where Anthony was staying.

The two were seen going into a room together; Page Six reports that JLo was wearing “thigh-high stiletto boots and a leopard-print micromini.”

Over two and a half hours later, Anthony left the room and jumped into his tour bus.

“He came out really quickly, with his head down, like he didn’t want to be seen,” a source told Page Six.

The source added that Lopez came out afterwards, smiling.

Lopez’s boyfriend Smart hasn’t been photographed with her in the last week. Anthony and Lopez were married for eight years and have two children, twins Max and Emme, 3.