Prince slammed both Madonna and Maroon 5 in an interview with February’s Billboard magazine, in which the famously reclusive and weird singer opened up about all sorts of things. 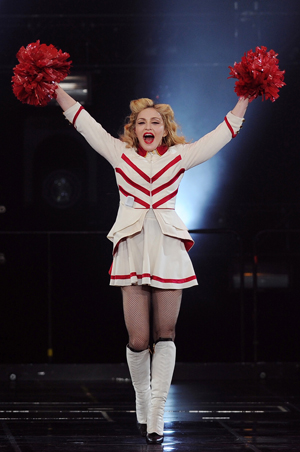 “It was always about Madonna,” Prince told Billboard magazine about the pair’s time together on the Warner Bros. label in the ’80s and ’90s. “She was getting paid, but at the same time we were selling more records and selling out concerts on multiple nights.”

Apparently the famously odd Prince is still smarting over his treatment by Warner Bros., many years after the fact. He felt the label promoted Madonna’s career over his. Guess he still does.

But things later went sour, highlighted by a 1994 interview in which Madonna called Prince a “little troll” (!!!!) and reminisced about a date: “He was just sipping tea, very daintily. I have this theory about people who don’t eat. They annoy me.”

In 2007, an apparently still-angry Prince said during a London concert, “I got so many hits y’all can’t handle me — I got more hits than Madonna’s got kids.”

The two looked like they were ending hostilities in 2011. Madonna was in attendance at Prince’s January 2011 Madison Square Garden show, where Prince made a friendly joke about the high price of Madonna show tickets while Madonna smiled back.

But this most recent round of hostility implies the feud’s not over.

Prince, who hilariously insisted that the Billboard reporter neither record his interview nor take notes (!), also had criticism for Maroon 5, who covered Prince’s “Kiss” on their 2012 album Overexposed.

“Why do we need to hear another cover of a song someone else did?” he said. “Art is about building a new foundation, not just laying something on top of what’s already there.”