Jennifer Lopez stepped out Wednesday night in New York for a screening of the new movie Parker, and talked about her boyfriend’s reaction to the movie’s steamy strip-down scene. 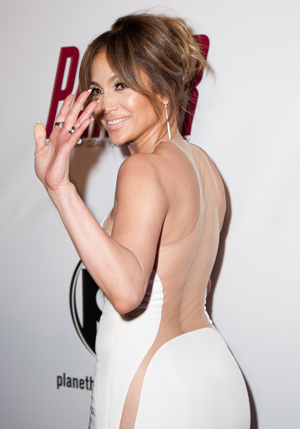 Jennifer Lopez appears in her first movie since 2012’s What to Expect When You’re Expecting, and you can see a lot more of her than usual.

In the upcoming drama Parker, set to bow on Jan. 25, Lopez strips down to her bra and panties when Jason Statham asks her to take off her clothes.

I mean, who wouldn’t strip if Jason Statham asked you to? But lest we forget, Lopez is 43, and squeezed out a couple of twins back in 2008. There aren’t many 43-year-old moms who’d feel comfy enough about their looks to appear almost naked on film.

Jennifer Lopez gets hotel maid fired for being a fan >>

Indeed, Lopez told Extra on the red carpet, she had to train hard for the film. But then she relaxed again: “I had McDonald’s right after the scene was over,” she told Extra’s Ben Lyons.

When Lyons said everyone’s talking about Lopez’s stripping scene, she responded, “Yeah, somebody said to me, the ‘famous scene’ and I was like, the movie’s not even out yet! It’s not famous!”

Lopez’s boyfriend, Casper Smart, didn’t attend the screening. Was he afraid of being in the theater when everyone got a look at Lopez’s assets?

Lopez wore a white sheer-back Lanvin dress to the premiere that gave looky-loos a little preview of coming attractions, shall we say?