If you spend the weekend packing your bags and start hitchhiking on Monday, you can probably get to Indio, California, the home of Coachella, in time for the first weekend in April. 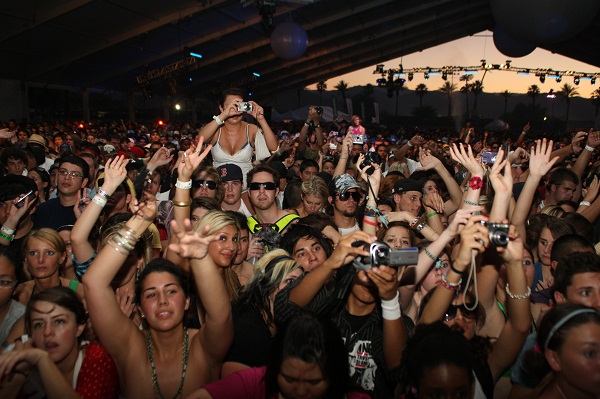 Of course, you might have to sell your soul for the $349 tickets (that price is without camping or a shuttle and are already sold out for the first weekend). Once you see the lineup, you’ll understand why it’s worth the possible starvation and truck driver molestation.

These two days are going to be off the heezy! Headliners for the night are The Stone Roses and Blur. (You know Blur, “Wooohooooo! When I feel heavy metal!”) The lineup also features the radio familiar sounds of (relative) newbies such as Of Monsters and Men and Local Natives, as well as staples such as Passion Pit, Band of Horses, and Tegan and Sara. Even with the addition of Lou Reed, Jurassic 5 and Grinderman, your Fridays are going to be the night to rock out.

Saturday is epic. If you don’t know who the headliner, Phoenix, is — you’re dead to me. The French band isn’t quite as popular in America as they are in Europe, but they’ve still had some really great hits here (like “1901” from that Cadillac commercial). Phoenix is just a rockin’, dancin’ good time… which is a pretty decent way to describe the rest of Saturday’s lineup, too. The goods include: The xx, Foals, The Postal Service, Two Door Cinema Club, and The Wombats. Just imagine lots of skinny jeans and glitter and flailing arms. But, if you’re not a dancer, Sigur Rós, the Dropkick Murphys, and the mellow workings of Ben Howard (swoon!) will also be on tap. Oh! And Grizzly Bear, Janelle Monae (from that song with fun., but also check out the perky “Tightrope”), New Order, Franz Ferdinand and Yeasayer.

No matter how many dance-induced blisters you have from Saturday, do not leave early. Sunday will be just as awesome. Sunday is basically just an odd mix-up of perfection. The headliners, Red Hot Chili Peppers, need no introduction. Coachella will also boast ( …wait for it… ) Wu Tang Clan as the highlight of the weekend. Plus, after a couple years on hiatus, Vampire Weekend will return. Expect lots of new music and don’t forget to bring your cardboard cut-out of an Oxford comma. Nick Cave and the Bad Seeds are a rockin’ classic you really can’t justify missing. But, most exciting is the addition of The Lumineers, those sweet, folky kids that have been all over your radio with “Ho Hey.” Also worth seeing — Jeff the Brotherhood, La Roux, Alex Clare (of “Too Close” fame), and Gaslight Anthem.

I’m breathless from typing all of that. For the full line-up (because I probably only mentioned a quarter of the names) check out the official site.

More on the music channel