America’s Next Top Model victor Lisa D’Amato is recovering from a freak accident that left her bloodied, bruised and in need of plastic surgery. 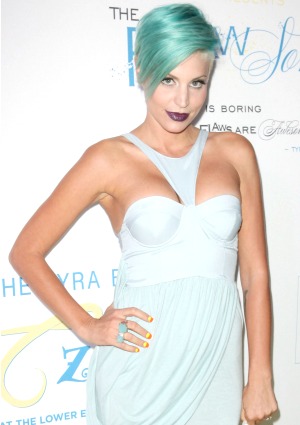 Lisa D’Amato, the 2011 winner of America’s Next Top Model, is on the mend after seriously injuring her face on the set of her upcoming film Cowboys and Indians. It turns out “monkeying around” can do real harm when things go wrong!

Explaining to People magazine that she was doing a handstand up against another crew member when they both fell, D’Amato insisted, “We were just kind of monkeying around… It was a totally freak accident. It wasn’t like we were doing back flips off the balcony.”

All the same, the tumble caused the 32-year-old to land on her face, crushing her nose. The crew member then fell on top of her, causing even more damage.

Winning ANTM is nothing to smize about, says CariDee >>

The ANTM winner was rushed to the hospital, and then to a plastic surgeon.

“I didn’t have the best nose in the world to begin with. It gave me character,” Lisa D’Amato joked of the surgery necessary to put her face back together. “Now I have a nice little nose job. I get a super cute nose.”

“Everyone seemed so sad,” she said of those around her, who were shocked and worried by the extent of the injuries. When not reassuring others she was all right, the model worried too.

“I looked at my hands. They were covered with blood,” D’Amato shared, recalling a moment of panic. “That’s when I thought, ‘Oh, my God, what did I do to myself?’ Of course, I started crying.”

On Tuesday, the newlywed shared this message with fans on Facebook:

“It’s only DAY 4 & look how fast I’m healing! I’m still puffy and all types of jacked up but the improvement is huge in just 48 hrs. #AMAZING #SURGERY #recovery now you guys don’t get to see my face & new nose till it’s perfect in a couple wks! Love you all and thank you with all my heart for the support. Day by day baby!”

Up next is more recovery and healing time while on a belated honeymoon with Adam Friedman, whom she wed in September. Then, it’s off to work on the television pilot In Reality TV. The show is described as, “A comedy series featuring a cast of characters more ridiculous than the characters they cast. Showcasing America’s favorite reality show personalities.”

Perhaps the Top Model’s epic face smash will prove to be fodder for the script?

Best wishes for a speedy recovery go out to Lisa D’Amato!