Is Rachael Ray’s husband stepping out on her? According to the National Enquirer, Ray’s husband, John Cusimano, is frequenting a Manhattan swingers club. 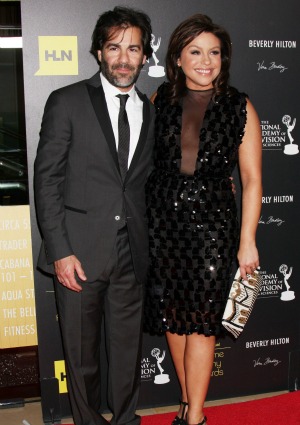 You may not know his name, but you sure know his wife. Now, Rachael Ray‘s husband John Cusimano is denying National Enquirer reports that he frequents a Manhattan swingers club.

The National Enquirer quotes unnamed sources who spotted Cusimano at the club, Checkmate, without his wife, but in the company of other females.

The source said, “After a bit of socializing at the buffet and the bar, John would always make his way to the back room. And every time he was observed in the coed locker room, he never took a shower alone.”

Naturally, the couple has released a statement denying the charges. Their rep said on Thursday, “This is yet another pack of lies printed by the National Enquirer who have been targeting John and Rachael for several years with no merit. As noted in the story, John’s lawyers have been in contact with the Enquirer and are exploring legal action against the publication for defamation.”

The couple married in 2005, the same year Ray signed the syndicated deal with Oprah Winfrey and King World Productions to host her own daytime talk show. Cusimano works as an entertainment lawyer and he also fronts a band called The Cringe.

It remains to be seen how this story will play out since the National Enquirer source claims Ray’s husband has been seen at the club at least six times both before and after his marriage to the TV personality.

This is not the first time that rumors about their marriage have surfaced. In 2007, the tabloids kept reporting on their tumultuous relationship that forced Ray to address it on The Rachael Ray show.

She told her audience, “Everybody gossips… but this stuff is hurting people’s feelings who are in our families, and friends of ours. They worry about us.”

Ray continued, “There’s always someone that’s going to be telling stories behind your back, but this is too much.”

At the time, her rep told People, “Rachael and John have never been happier.”

Let’s hope that statement is true this time around, too.