A wise man will never, ever cross Carrie Underwood! The singer’s “Two Black Cadillacs” video has premiered, and it once again depicts a scorned woman getting revenge. 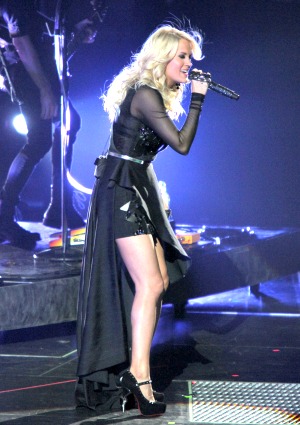 Carrie Underwood is once again acting out scenes of revenge on a cheating boyfriend. This time, however, it’s murder the blonde beauty is committing in “Two Black Cadillacs.”

Much like her 2006 hit “Before He Cheats,” in which the singer exacts revenge on a cheating boyfriend’s truck, love gone wrong is the center of this latest hit. This time, however, it’s double trouble for the two-timing fella, as his girlfriend and mistress team up to hunt him down.

In “Two Black Cadillacs,” Carrie Underwood belts out the dark tune as she drives a black Cadillac, naturally. Eventually the man responsible for breaking her heart is cornered against a brick wall. As the tension builds, the crooner stomps on the gas.

The Christine-inspired car then works a bit of auto-repair magic, while we get a glimpse at the sexy star strutting over to the casket at her deceased boyfriend’s funeral.

The real-life wife of Mike Fisher, who is very happily married, tweeted Wednesday evening, “Thank you all so much for the love you’ve been giving me for the ‘Two Black Cadillacs’ video! You guys are awesome!”

Do you like Carrie Underwood’s dark “Two Black Cadillacs” video?