Michael Bublé is “feelin’ good” right about now: His wife, Luisana Lopilato, is pregnant with their first child. 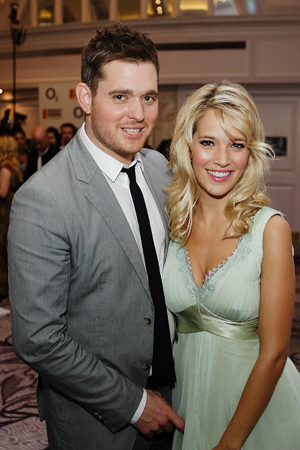 Happy news for singer Michael Bublé and his wife Luisana Lopilato: They’re going to have a baby!

The pair made it official by posting a short YouTube video for their fans.

“Mike, LU and … mini Buble!!!” reads text on the short clip, along with an ultrasound image. “We’re having a baby Bublé!”

All together now: Awww!

The pair married in 2011 after Bublé met Lopilato during a concert in her home country, Argentina. And, basically, Bublé made an a** out of himself.

Michael Bublé’s crowd tease: No Kim Kardashian on his stage >>

“I wanted to go to his show because I liked his songs, but I didn’t know what he looked like,” Lopilato told the U.K.’s Daily Mail in 2012. “I was there with my sister and a really handsome male actor friend I worked with, and Michael came up and asked us to come to the after-show party. I didn’t speak English, but my male friend did and Michael was talking to him and saying things to him like, ‘Oh my God, look at your muscles.’ I just thought he was gay; I rang my mum and said, ‘I am at a party with Michael Bublé, and he’s gay!'”

But, he’s not — and he made his intentions pretty clear that night.

“As I left the party, he said to me, ‘You are my wife, you just don’t know it yet,'” she continued. “And I said, ‘Of course you want me to be your wife, every man wants to marry me, so we will have to see!'”

Anyway, these two seem like a perfect match — right down to their desire for children.

“I’ve said to Luisana a million times I’d love to have kids,” Bublé told ET Canada in 2011. “But I always say to her when you’re ready — when you feel like you’ve lived and you’ve partied and done all the things you want to do. When you’ve worked your butt off, then tell me.”