Have you seen the preview for an upcoming episode of Jimmy Kimmel? Looks like he finally has time for Matt Damon. 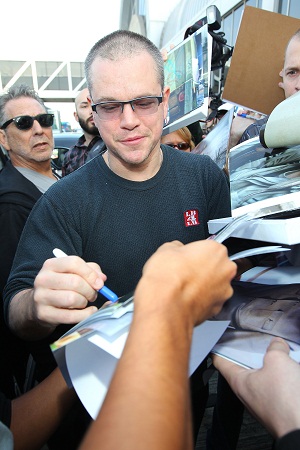 For years now, Jimmy Kimmel has ended every show with (mostly) the same line. He looks into the camera, doing his best to look regretful, and says, “Apologies to Matt Damon, we ran out of time.”

On one hand, it seemed a little like a burn. Kimmel had time for all sorts of other actors, but they always “ran out of time” for a Matt Damon segment. The truth was far from it, though.

Aside from the cliche “save the best for last” business, Matt Damon was just so huge. The real joke was more along the lines of, “We got these other guys, but we still don’t have Matt Damon.”

In the early years of Jimmy Kimmel Live, they probably couldn’t get him. Later, it most likely seemed like too funny of a streak to break… even for the ratings an interview with Damon would surely earn.

Through the years, there have been funny little projects together. Damon played along and did a sketch with Kimmel’s then-girlfriend Sarah Silverman, where they pretended to be having an affair. Later, the boys staged a fistfight.

For the first time ever, though, it looks like Kimmel will finally have time on his show for Damon. If only because Kimmel won’t actually be there. Just watch this clip…

You know… Matt Damon is pretty good at being creepy! Sure, we all probably prefer him to continue playing kind-hearted, swoon-worthy guys. But, I wouldn’t mind seeing a little more of his darker side.

Whether Damon will actually appear on the show for an interview or whether he’ll be there without Jimmy will be a big surprise for the night. No matter what, though, we’re glad the two boys have found time for each other.