The strangest duo on earth pairs up again. Lady G. and Tony B. will make an album together. Would you buy it? 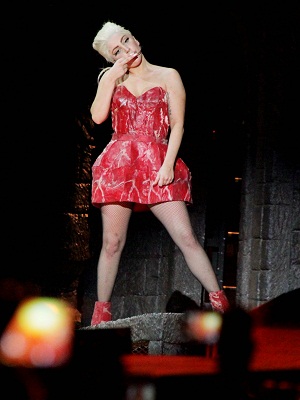 Lady Gaga has announced via Twitter that she and Tony Bennett will pair up for a brand-new album.

Lady G tweeted from Tuesday’s inaugural ball, “I had the most amazing evening with The President, First Lady & The Whitehouse staff.”

She went on to post multiple pictures from the glamour night’s event. Finally, she posted a picture with 86-year-old crooner, Tony Bennett, saying, “And here’s me and my handsome date. I simply cannot wait for our album together, he’s my darling!” Eek!

An album wouldn’t be Mother Monster’s first stab at singing the kind of classic songs Bennett is popular for covering. She actually did a duet with him on “The Lady Is a Tramp” for his album, Duets II in 2011.

She’s also been known to sing the classics on other occasions, too, including the television Christmas special she did awhile back. Gaga can do classy just as well as she can do “creepy.”

Here’s a look back at her crooning with Tony…

As for other duets, let’s not forget her awesome pair-up with fellow inauguration-goer Beyoncé on “Telephone.”

Aside from any work Lady Gaga is doing with Bennett, she’s also about to release a brand-new solo album, ARTPOP. She first began recording the album in 2011 and continued work on it throughout 2012. While no official release date has been announced, the album is set to be released in two volumes sometime this year.

We can’t wait for either project from Lady Gaga, as long as it’s some new music. Which are you more excited for?