Emmy Rossum is not a stranger to Hollywood. With a Golden Globe and MTV Movie Award nomination, as well as a Critics’ Choice award, it’s safe to say she’s talented. But does she successfully cross over into the music industry with her latest song? 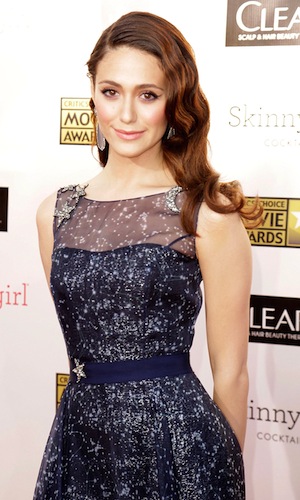 The beautiful Emmy Rossum is best known for her role on the Showtime series Shameless. Her delicate and feminine features combined with her grace give her a glamorous appeal when she walks the red carpet.

Is this a new musical ad-venture?

Hardly the case! In 2007, Rossum was featured in USA Today, and discussed her cultivated music background, her stint with Phantom of the Opera in 2004, and her fascination with creating music again when she was 21 years old.

In the article, she talked about her debut album Inside Out, and her choice to not take on an opera-oriented style, but instead categorize her music as “ambient pop.”

While audiences may be surprised to hear she had an album and a musical talent that seemingly is hidden behind her other numerous abilities — this new album, titled Sentimental Journey (her first with Warner Bros. Records, according to BroadwayWorld), is out on Jan. 29, and should spark a lot of interest.

E! Online says the album “comprises of a collection of covers of classic hits from the ’20s to the ’60s.” Her voice is nostalgic to a period far beyond her years, and entirely foreign to music on the radio. She isn’t a Bing Crosby, but her old Hollywood sound is refreshing. In a sea of conformity and likenesses in musical genres everywhere, it begs the question: Who do you know that sounds like that anymore?!

This track, “These Foolish Things (Remind Me of You)” has been sung by Nat King Cole, Bing Crosby, and the glorious Michael Bublé. She gives this a feminine, airy, and sultry spin that makes this a cover I will go back and listen to time after time. It piques my interest in her as a musician, and certainly makes me want to purchase her album!

In another tidbit from E! Online that proves impressive is: “the 12-song track list… was recorded in three days”! That is no easy feat, and certainly warrants a commendation for the level of quality she still is able to retain.

What do you think readers? Does she deliver or should she stick to acting?

Want more? Check out other exciting music news and reviews that we recommend: