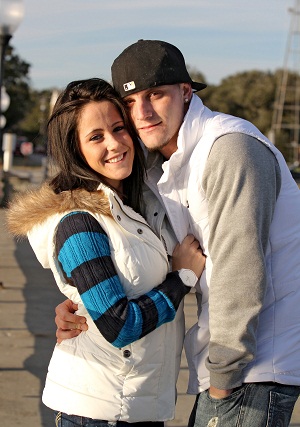 Evans, whose lawyer confirmed that she is pregnant, filed four counts of assault on a female and unborn child in Brunswick, North Carolina on Jan. 23. According to her lawyer, Dustin R.T. Sullivan, that kind of assault is taken the most seriously.

“They are the highest level of misdemeanor you can get,” Sullivan noted. “He faces a maximum 150 days in jail per charge.”

Adding to the charges, Evans took to Twitter the same day to let her husband know how she felt, tweeting, “I am getting a divorce, ASAP. YOU F–KING LEAVE OUT OF TOWN AND I MIGHT BE HAVING A MISCARRIAGE?! F–K U, U F–KING PIECE OF S–T.”

The two married early last month after dating for just three and a half months. At the time, Evans repeatedly said she wasn’t pregnant. Her lawyer, however, confirms that Evans is still pregnant.

While he can’t reveal the nature of the assault, he said the most recent incident happened on Monday, Jan. 21.

“She was physically assaulted over a period of time,” Sullivan added. “She will be a victim in the case and will be represented by the State of North Carolina.”

The first court date in the assault case is scheduled for Feb. 18. Meanwhile, Rogers still faces two other criminal cases in Brunswick County: a felony and misdemeanor. Looks like Jenelle really picked a winner.

As for how our most talked about Teen Mom is doing, Sullivan told E! she was doing okay.

“I have seen her in much better spirits in the past,” Sullivan said. “She seems to be very concerned about her general health and well-being. She is not upbeat at all. She is going through a very difficult time right now.”

Hopefully everything works out peacefully so Jenelle and her baby-on-the-way can live a happy life.