Denise Richards is in mourning today for her dog, Hank. Word the beloved French bulldog has died was shared by the actress on Twitter, where fans have offered messages of support. 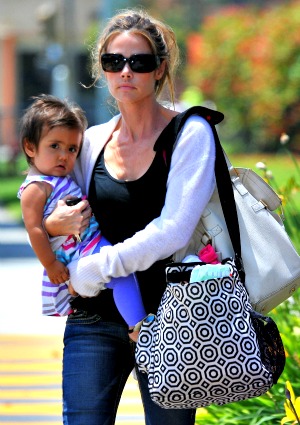 One of Denise Richards‘ four-legged family members has died. Mourning the loss of her French bulldog, Hank, the actress took to Twitter Monday to share this message with fans:

“Last night we lost our beloved Hank … I will miss him dearly, 13 yrs old … been there for me thru it all Best dog ever & part of our family.”

As condolences poured in from fans of the actress, who is pictured here with daughter Eloise on her hip, she went on to write, “Thank you so much for your kind messages about Hank…it means a lot to me. You guys are the best..so thoughtful & kind…xo.”

Certainly, as a part of Denise Richards’ family for 13 years, Hank had seen a lot. The canine would have been there for his owner’s pre-wedding jitters in 2002, the birth of daughter Sam in 2004, her divorce from Charlie Sheen in 2005, the birth of daughter Lola that same year and the adoption of Eloise in 2011!

While the girls are undoubtedly upset over the loss of Hank, they do still have a number of pets at home to turn to for comfort. How many, exactly? “The number varies, because I’m often fostering,” Denise Richards said previously. “Let’s just say: I built a dog room at my house.”

Recently, the actress adopted a puppy that ended up without a home when Hurricane Sandy hit New York.

Her hope for being able to save more dogs in the future? “A farm with a rescue sanctuary,” Denise Richards has said. “I would love to have that one day.”