New mommy Adele has been oddly cagey about her son’s name, but may have revealed it by wearing a nameplate necklace in public. 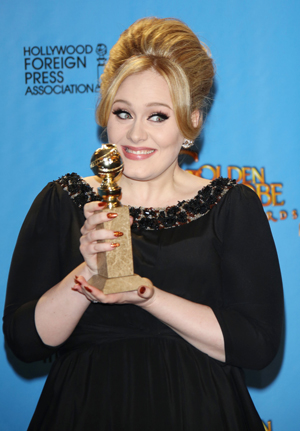 Angelo. That’s what the nameplate necklace singer Adele was wearing in Los Angeles while shopping for baby clothes.

Is it the name of her son, born in October to Adele and fiancé Simon Konecki? Sources close to the singer say yes, reports Spinner.

Adele! Your baby’s name is not some kind of magic spell! You playing coy and making it a big deal is the only thing making other people care about the name at all.

Adele has declined to reveal the name of her baby boy since his birth, most recently at the Golden Globes where she told the press that revealing his name is “too personal and intimate. I’m not ready!” She added, “I just call him Little Peanut!”

Okay, a name? It’s not intimate. It’s the very first thing you say to a new person: Hello, my name is Adele.

It’s the least personal and intimate personal fact in the whole wide world! But okay, you’re a new mom, you’re being weird, we get it.

So maybe if you want to keep something secret, you don’t buy a necklace with the secret inscribed on it? And wear it in Los Angeles, home of a million paps, just when you’re making a high-profile appearance in said town?

Look, fellow divas Mariah Carey and Shakira weren’t embarrassed to tell the world they named their offspring Monroe and Moroccan and Milan, respectively. Stop making a big thing out of it.