Haven’t we all thought it’d be cool to go to a presidential inauguration? Here’s one look at this year’s celebration. 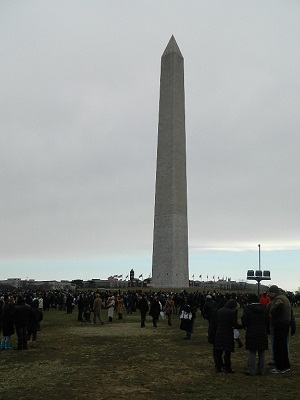 A presidential inauguration is a special occasion no matter what. This year, we re-elected an African American and we swore him in on a day when we celebrate another African American leader, Martin Luther King Jr. While the crowds were only expected to be half as big as the inaugural celebration four years earlier, it was still an incredible moment in history that this writer was excited to witness.

However, the day was far from perfect. As the crowd gathered on the National Mall to watch President Obama swear his oath of office on a JumboTron, many things were different from last time.

To start with, four years ago patriotic revelers could walk right up and place their hands against the cold surface of the Washington Monument. This year, the popular landmark was fenced off. Not for security reasons, but because of the minor damage thought to be done to the age-old obelisk from an earthquake that shook D.C. a while back. It served as a stark, white and towering reminder of just how frail even the oldest traditions can become.

Newer traditions and technologies aren’t any more stable, though. As tourists crowded around and stared up at the JumboTron, they looked at an often-disjointed picture and missed every other word. The screens “buffered” their way through one of our nation’s historic moments. There were times when we actually stared at a black screen. The nation’s tech support couldn’t get its act together. 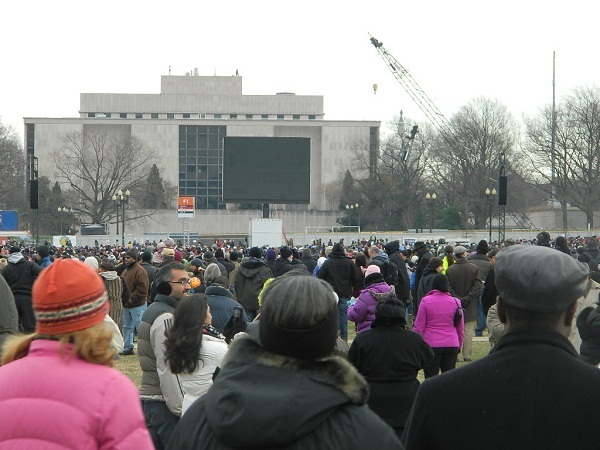 If it was annoying during a speech, it was downright creepy during the musical performances, especially when the Brooklyn Tabernacle Choir sang a perfect version of the Battle Hymn of the Republic. As the sound and image skipped and buffered, the effect sent eerie waves of sound across the National Mall. Remember when they used to say if you played certain records backwards, you could hear the voice of Satan? It sounded a lot like that.

A large portion of the crowd began the walk back to the metro station just before President Obama took his oath. I heard the disjointed speech echo across the ground while picking my way between crowds, National Guard members and D.C. police horse trailers (they brought a nice, rustic smell to the city). Even with the disappointing relay, there were a lot of people and my companion commented on how easy it would be to carry out a terrorist attack… for some crazy person to open fire. Maybe I’m naive, but I felt pretty safe. While walking the streets the night before, I saw (presumably) those same uniformed men and women hanging out in buses just waiting to sweep the place for anything suspicious. The rattle of a slamming Humvee door behind me made me feel safe, while questioning the security of the people inside those same vehicles elsewhere on the planet. Mostly, though, I was cold… very cold. And death seemed like a viable escape plan.

Later, inside the confines of the cozy pub Elephant and Castle, I found myself watching Beyoncé “singing” on the dozen or so screens that lined the walls. When the president ate, so did his less-committed voters. I’m not sure about his lunch, but my shepherd’s pie was delicious. I was happy to be alive, in America and glad to have “witnessed history.”

But I think I would have been just as happy in my pj’s while watching the speech on the news.