Absorbing AMC drama Mad Men, which won the Outstanding Drama Series Emmy in four of its five seasons, is coming back for a sixth this spring. 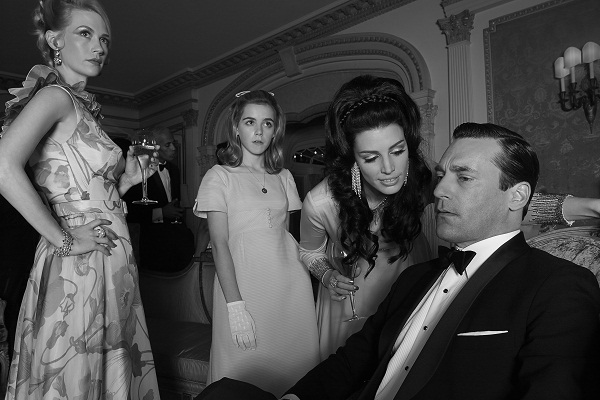 Don Draper is coming back April 7, so get your classic cocktail glasses and vintage underwear ready for the premiere party.

Mad Men fans have been waiting with bated breath to hear the announcement of the start of the sixth season. That date is more fraught than usual, since Mad Men has aired at various times of the year, including one break in which the show didn’t appear for a long, slow 17 months due to complex negotiations within AMC, the channel that airs the show, and Lionsgate, Mad Men‘s production company.

Fans feared another long break before the start of the sixth season, but a relatively short 10 months will have passed between the April 7 Season 6 premiere and the Season 5 finale, which aired June 10, 2012.

Still, 10 months is a long time to wait. Fans hoping to hear pre-premiere spoilers are mostly out of luck, though, because Mad Men‘s actors fear incurring the wrath of famously secretive showrunner Matthew Weiner if they reveal any plot points.

Elisabeth Moss, who plays Peggy Olson on Mad Men, said earlier this month that “about half” of the Season 6 episodes had been shot and they were “pretty amazing.”

Weiner himself, who wrote the Season 6 premiere, said that the two-hour opening show is “different than last year’s.” Fans will remember that the Season 5 premiere was also two hours long and featured Jessica Paré as Mrs. Don Draper, throwing her husband a not-so-successful 40th birthday party highlighted by her sexy rendition of the French pop song “Zou Bisou Bisou.”

Weiner insisted that viewers should be familiar with that premiere and the entire fifth season before diving in to Season 6. “You should know what happened at the end of last season before you see the episode. The whole season is in reference to last season.”

Mad Men goes to the movies! >>

Weiner also said that the Season 6 premiere is “constructed like a film” and “foreshadows the rest of the season.”

Fans hoping to catch up with Season 5 can watch all of it on AMC On Demand; episodes will also air each Sunday morning starting at 6/5c a.m. on AMC.

Weiner and AMC have agreed on an option for a seventh season, though they haven’t officially announced it yet. Weiner claims to have an “endpoint” in mind for the series, but hasn’t shared his vision.