Take a look at our favorite moments from the 2012 SAG Awards. Trust us, you don’t want to miss the Bridesmaids’-inspired drinking game or the awkward Sofia Vergara red carpet moment with E! 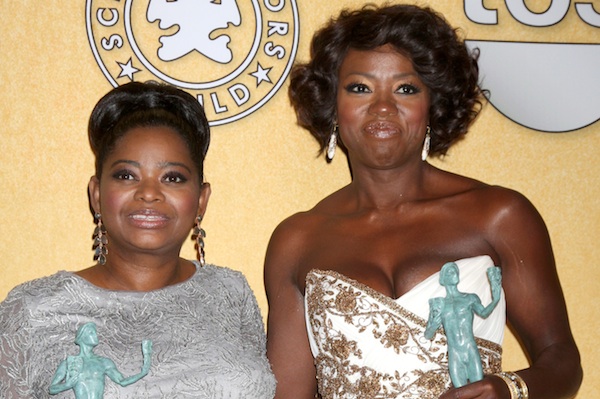 The 2013 SAG Awards are finally upon us! Catch the SAG Awards live from Los Angeles on TNT or TBS on Sunday, Jan, 27, with red carpet coverage starting at 6:00p.m. EST. The SAG Awards are a little less formal than other Hollywood award shows and unique because they focus solely on actors, actresses and stunt performers. Winners of SAG Awards are chosen exclusively by the Screen Actors Guild; about 100,000 members vote on the selected nominees.

Review some of the best moments of SAG Awards past below and don’t forget to check back on SheKnows for complete 2013 SAG Awards coverage.

Melissa McCarthy and Kristen Wiig presented along with Maya Rudolph and educated us all on the popularity of beloved director Martin Scorsese. The trio presented their hit film Bridesmaids as one of the candidates for Outstanding Performance by an Ensemble Cast (film). Watch the hilarious drinking game clip below.

Most heartfelt speech at the 2012 SAG Awards

We just love Viola Davis‘ heartfelt acceptance speech for her win at the 2012 SAG Awards for Outstanding Performance by a Lead Female Actor in film. Davis’ peers went wild over her win — and we even catch of glimpse of current nominee Jessica Chastain.

Maybe it was just the festive environment of the 2012 SAG Awards, but Giuliana Rancic‘s decision to yip as Sofia Vergara came up to the E! red carpet podium to chat was a bit jaw-dropping. Both ladies look lovely, but Rancic kept trying to imitate Vergara’s accent — probably all in good fun — but it was likely a bit uncomfortable for E!’s producers.