It’s official: Shakira is now a mom to a baby boy. 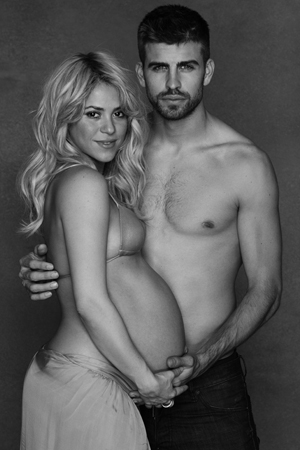 Shakira is a mom — and this time, it’s not a joke.

The “Loca” singer — and her boyfriend, soccer star Gerard Piqué — welcomed a son on Tuesday night, according to a post on her official website.

“We are happy to announce the birth of Milan Piqué Mebarak, son of Shakira Mebarak and Gerard Piqué, born January 22nd at 9:36pm, in Barcelona, Spain,” the couple wrote.

“The name Milan (pronounced MEE-lahn), means dear, loving and gracious in Slavic; in Ancient Roman, eager and laborious; and in Sanskrit, unification,” they continued.

“Just like his father, baby Milan became a member of FC Barcelona at birth.”

Baby Milan weighed in at 6 pounds, 6 ounces, according to the hospital.

The new parents have been celebrating their son’s impending birth for a while, though: They launched an online baby shower last week to benefit UNICEF.

The pair asked for specific amounts to buy items that babies in developing nations need to grow. For example, a donation of $5 buys a mosquito net, while $110 buys healthy, ready-to-eat foods.

That’s Dame to you: Shakira knighted in France >>

“Every couple that’s expecting a baby shares our same dreams and hopes for their children,” Shakira said. “However, many don’t have the same opportunities we do to give them a happy childhood free of preventable and easily-cured illnesses. Together we can change that.”

Read on for more Shakira