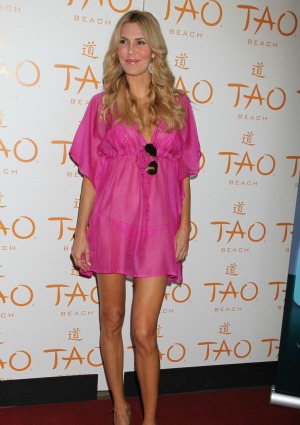 Batter up for another inning of the Brandi Glanville versus LeAnn Rimes saga that seems to flare up weekly on television and on Twitter. This week, it was Glanville’s turn to fire the first shot.

On Monday night, The Real Housewives of Beverly Hills star appeared on Bravo TV’s Watch What Happens Live with Andy Cohen to promote her new book, Drinking and Tweeting. Throughout the broadcast that aired live on the East Coast, viewers sent in their questions. Naturally, the topics turned to Rimes and her husband, Glanville’s ex, Eddie Cibrian.

Per usual, the mother of two opened her mouth and didn’t stop. First she shared, “There’s just so many. I feel like every day there’s a tell-all interview. It’s kind of cray-cray.”

Cohen then baited the former model about her book and asked if she was “inferring that LeAnn is Eddie’s kind of sugar mama.”

That met with a pretty resounding “yes” by Glanville, who mentioned that he always wanted to live in an exclusive community in a large house. It is exactly the lifestyle he is leading with Rimes who has made a healthy fortune from her music career.

To add salt to the Rimes-Cibrian wound, Today Show host Hoda Kotb, also a guest on the Bravo talk show, chimed in with, “Have you ever heard the saying — and I don’t know if this is applicable to him — ‘the way you got him is the way you’ll lose him’?”

Of course, Glanville agreed with the morning show journalist. That’s when Cohen puts the final nail in the coffin on this topic.

He asks his guest, “Do you think that now she is…”

And that’s when Brandi interrupts with, “Insane?”

Cohen follows up with, “Do you think that?”

“Yes, I do.” says the reality star firmly.

Well, another tabloid feud that won’t go away. Rimes’ affair with Cibrian began in 2009 while they were both married. After divorcing their respective spouses, they wed in April of 2011. Neither of Cibrian’s ladies have let go of anger and they both continue to battle it out in public.

Of course, Rimes was the one who got in the last word after hearing about Glanville’s comments. She tweeted, “Wow the texts from my friend. Kisses and KMA [kiss my *ss].”