She might lip sync at important national events, but there are a couple of things Beyoncé insists are 100 percent real: Her pregnancy and her marriage. 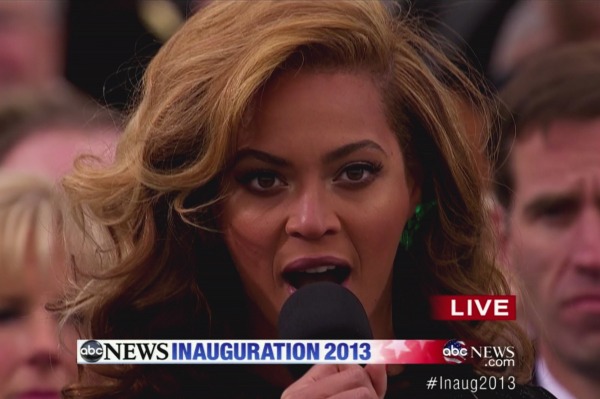 Beyoncé may have faked the national anthem at yesterday’s inauguration, but she is adamant she did not fake her pregnancy. The singer told GQ that what hurt her the most was seeing her mom and sister have to deal with the media’s lies and speculation.

“I felt like I kind of had to protect my mother, because when people made up the silliest rumor about me not really being pregnant, she was there when I went through all of those things,” Beyoncé told the mag. “And my sister. They were very, very defensive. It’s not personal to me, and it comes along with the job, but the lack of respect — people will just go too far sometimes.”

That very real pregnancy and very real birth that resulted in a very real baby that is really hers showed her what being a woman is all about for the first time, she said.

“When I gave birth, that was the first time I truly let go and surrendered. And it taught me how amazing that feels… giving birth made me realize the power of being a woman,” Beyoncé explained. “I have so much more substance in my life. And expressing that excitement and that sensuality and the connection I have with my husband — I’m a lot more comfortable with that now. I actually feel like my child introduced me to myself.”

Kelly Clarkson, Beyoncé get patriotic for the inauguration >>

Another thing that’s not fake: Her marriage, despite the fact that she rarely wears her wedding ring. In fact, one of the reasons her partnership with Jay-Z is so successful is because she has maintained her independence.

“I was independent before I met my husband, and we have such a natural chemistry and a genuine relationship, and it’s based on the things that relationships are supposed to be based on,” she said. “I’ve seen, growing up, when a woman or a man in a relationship — it doesn’t matter which one — doesn’t feel confident, they feel a bit trapped.

“Your self-worth is determined by you. You don’t have to depend on someone telling you who you are.”

Read more outtakes from GQ‘s interview with Beyoncé on GQ.com.