Eighties juggernaut New Kids on the Block announced live on The View that this summer’s New Kids tour will be with fellow boy bands Boys II Men and 98 Degrees. The dozen members of all three bands joined View hosts onstage for frank talk about Twitter and current boy bands. 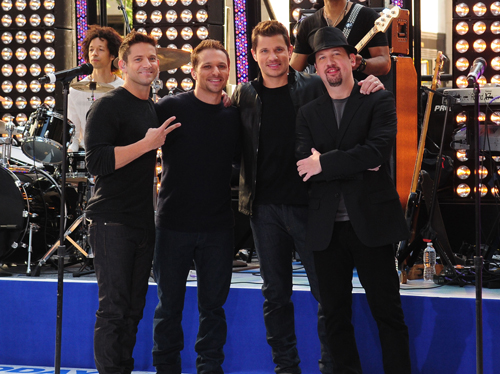 Viewer ears are still ringing after today’s The View, thanks to host Sherri Shepherd’s squealing upon learning that a boy-band-palooza will be touring the U.S. this summer. A shrieking audience was told only that New Kids on the Block would be on the show with a big surprise.

Surprise! The Package Tour, with all three bands, will visit spots across America this summer, and all three bands joined hosts Sherri Shepherd (wearing an I Heart Donnie T-shirt) and Elisabeth Hasselbeck onstage.

When NKOTB was asked to answer a tweeted question from a viewer (“What is the most embarrassing thing that a fan has ever done to get your attention?”), the band said the Twitter names are sometimes pretty funny.

“How could you not follow somebody with such a sense of humor?” asked Donnie Wahlberg, dapper in a slim-fitting suit.

Jordan Knight said that the emergence of social media has changed the band’s relationship with its fans: “Back in the day it was like our fans were a wall of people, just flashbulbs. Now we actually know our fans. We know their personalities, we know their names, we feel a lot closer to our fans.”

Band members also discussed other boy bands: New Kids on the Block says they were inspired by early boy band (and Bobby Brown launching pad) New Edition, while Jeff Timmons of 98 Degrees (a latter-day boy band probably most famous for producing Jessica Simpson’s ex-husband, Nick Lachey) had some advice for new boy bands like One Direction: “Surround yourself with people you can trust: good agents and good management. That’s a really difficult thing to find in this business.”

Timmons ought know — back in 2000 the band was sued by management company Top 40 Entertainment, which claimed the band terminated a binding contract with the company early.