Our dreams are coming true: NKOTB is going out on tour with 98 Degrees and Boyz II Men! 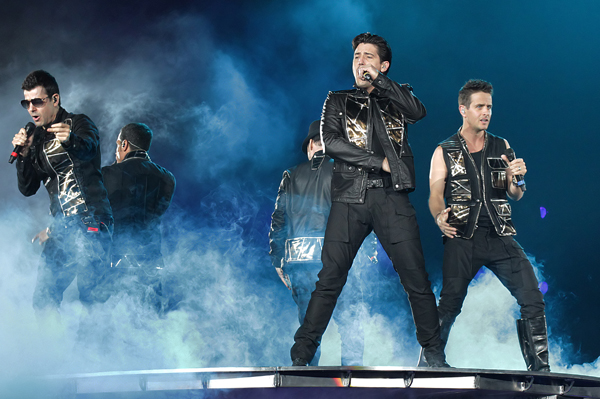 Okay, so maybe that doesn’t exactly roll off the tongue, but we’re still excited: The New Kids on the Block confirmed that they’re going out on yet another tour — this time with openers Boyz II Men and 98 Degrees.

Yes, you read that right: 98 Degrees is officially getting back together with all four original members — Nick Lachey, Drew Lachey, Justin Jeffre and Jeff Timmons — for a tour starting May 31 in Uncasville, Connecticut.

“It just seems like we are getting better and better,” NKOTB singer Joey McIntyre told People while confirming the news. “We’re excited to get out there, rock out and have fun.”

The tour will coincide with the release of NKOTB’s new album, 10, scheduled for release on April 2.

So, why add Boyz II Men and 98 Degrees to the bill? It’s a win-win situation for all.

“There is a lot of nostalgia and we embrace that,” McIntyre added. “But it always feels young and fresh. I guess that’s one of the great things about being in the music business is that you never have to quite grow up.”

98 Degrees turns up the heat on Today >>

Nick and the rest of the 98 Degrees guys haven’t publicly commented yet, but last year he told Fanhattan.com that NKOTB’s reunion sort of pushed them toward a reunion.

“You see them go out and do that and have fun and have success, but we always said, ‘You know, we leave the door open on the reunion. We’ve never broken up. We’re just taking a break,'” the new dad said. “For us it was more about the timing being right, everyone’s schedule being in the right place and I think now we’re at the place where that’s actually starting to happen.”

And we can’t wait.