Prince Harry has broken his silence about the shocking naked photos that proved what happens in Vegas doesn’t always stay there. 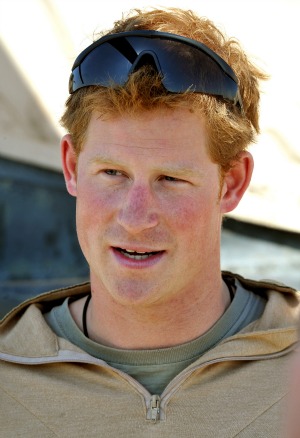 Prince Harry is home from Afghanistan and chatting away about everything from killing insurgents to the royal baby-to-be — and he’s talking about those infamous photos that exposed his gingersnap to the world.

While the prince admits he should know better, he was largely unrepentant about his Vegas party weekend despite the fact that his dad Prince Charles thinks he’s Mufasa and gave him advice straight out of The Lion King.

“Certain people remind me, ‘Remember who you are, so don’t always drop your guard,'” said the prince in an official interview released to the press. “At the end of the day I probably let myself down [in Vegas], I let my family down, I let other people down.”

“But I was in a private area and there should be a certain amount of privacy that one should expect. Back at home all my close friends rallied around me and were great.”

“It was probably a classic case of me being too much Army and not enough prince. It’s a simple case of that.”

“I have always said work hard, play hard. I will always be enjoying the job … however long it may carry on for, and then I have the other job to fall back on,” he said, referring to both his Army position and his royal duties.

Those royal duties might be a lot cushier than the Army, but they come with a heavy price: The constant media scrutiny he and his brother Prince William have endured since birth, and that many blame for the death of his beloved mother Princess Diana.

“My father always says, ‘Don’t read it, it’s rubbish’ [but] I am surprised how many people in the UK do actually read it. Of course, if something is written about me I want to know what is said,'” he said.

“I don’t believe there is such a thing as a private life anymore … I am not going to sit here and whinge [but] there’s the internet, there’s Twitter,” Harry explained. “Everyone’s phone has a camera on it now. You can’t move an inch without people judging you, that’s the way life goes.”

“I think it’s fairly obvious how far back it goes. It’s when I was very small. But at least I have a job, many other people don’t.”