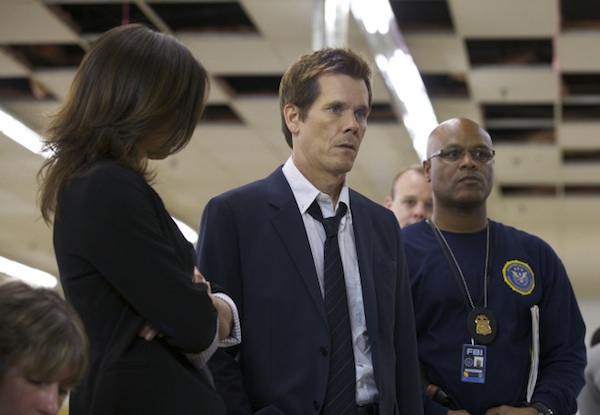 FOX just premiered the dark crime drama The Following and it is awesome, complex and way creepy. If you scare easily or the sight of blood makes you queasy, you may want to watch this one with the lights on and the doors locked.

In typical tortured-cop story fashion, Ryan Hardy (Kevin Bacon), drinks too much, doesn’t play well with others and says things like, “But I’m not an agent anymore.” But gosh dang it, he’s the only man for this job! When serial killer Joe Carroll (James Purefoy) escapes from prison a month before he’s supposed to be put to death, the Bureau calls in Hardy to help track down the deranged murderer.

Apparently, Hardy and Carroll have quite a complicated past. When Hardy first started investigating a series of murders in 2002, he began to suspect Professor Joe Carroll. But he didn’t have a shred of evidence, so he had to pursue the case on his own time. This is lucky for college student Sarah Fuller (Maggie Grace), because Hardy happened to be right outside her door when Carroll was trying to chop her to pieces. Hardy saves Sarah, but not before getting shot in the heart.

Now it’s the present day, Hardy has a pacemaker to keep his heart going, Sarah’s trying to get on with her life and Carroll’s planning on finishing what he started with her. Oh, and somewhere in there, Hardy also slept with Carroll’s wife. That makes the killer very unhappy.

Carroll is pretty passionate about classic and dark romantic authors, especially Poe. The way he views the world might be best summed up in this quote: “The death of a beautiful woman is unquestionably the most poetical topic in the world.” Romantic, right? Based on his readings, he also likes to gouge out their eyes and torture them a bit. All of this only slightly diminishes how pretty and charming he is.

It’s unfortunate for Sarah that Hardy figures out a bit too late she’s gone missing and where to find her. When he arrives on the scene he discovers that Sarah has reached the same fate as Carroll’s previous victims. Hardy nearly kills Carroll, but his pacemaker and a brigade of FBI agents get in the way.

With one serial killer back in prison, the FBI gets some really bad news: Carroll’s been using the internet to get in touch with his “fan club” of wannabe murderers. So far he’s been successful at convincing them to stab themselves in the eye at a police station, practice their new skills on dogs, murder young girls and now kidnap Carroll’s son, which is all part of his evil, complicated plan to get back at Hardy.

Now there are countless bad guys on the loose and a crazy dude ruling them all. If I lived in Virginia I’d be freaking out right about now.