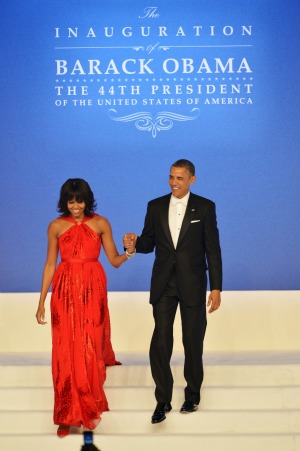 Call her the First Lady of Fashion: Michelle Obama hit all the right notes at her husband’s inauguration yesterday, not the least of which was the stunning red ball gown she donned for the inaugural balls the presidential couple hopped between all night.

Once again, Mrs. Obama chose a gown designed by Jason Wu, who also designed the ethereal white gown she wore at the first inauguration.

The red chiffon and velvet floor-length gown featured a jeweled halter neck to show off the first lady’s famously buff shoulders and arms. “For this occasion, it had to be real diamonds,” Wu told CBS.

Mrs. Obama had several gowns from which to choose, and Wu didn’t find out she would be donning his creation until the same time as the rest of the world: On TV, when he saw her step out on stage to dance with her husband.

“I was still at my studio designing the fall collection that I’m presenting in less than three weeks,” Wu said Tuesday on CBS This Morning. “So I was actually with my team, which was really nice.”

“When I saw it, I was just floored,” he said. “I just couldn’t believe that she chose me for the second time… I am so proud of it. I can’t believe it. It’s crazy. To have done it once was already the experience of my life. To have a second time is tremendous.

Kelly Clarkson & Beyoncé get patriotic for the inauguration >>

“I sent a couple sketches but we only made one dress. Red was what came to my head right away… As a designer I always have to trust my instincts.”

“Last time, she didn’t [make suggestions], but this time I said, ‘I think red is a really good color’ and they said, ‘Well, Mrs. Obama thinks red is a good color, too… I guess we were in sync from the beginning.”

The first lady accessorized the gown with Jimmy Choo shoes and a handmade diamond embellished ring by jewelry designer Kimberly McDonald. The Wu gown will be sent to the National Archives, where it will be kept with historical gowns of first ladies past.