If you’ve ever watched the legendary musician Gavin DeGraw in an interview, you probably came away with a sense that he’s down-to-earth and laid back. And it’s more than the hats and sexy, timeless voice. He’s that rare super talent who gets it. Here, he chats with us about his upcoming birthday, a tremendous new partnership with Folgers Coffee, and those on-going Colbie Caillat rumors. 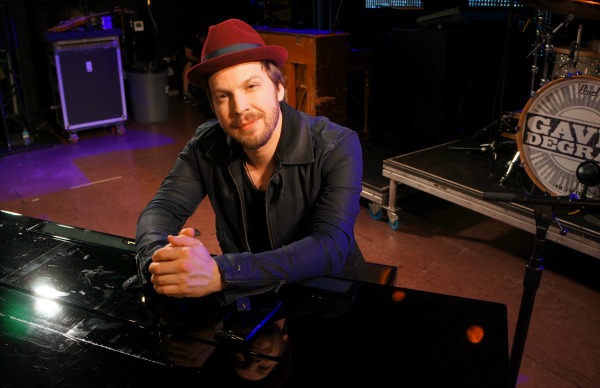 Kat: Thanks so much for visiting with me today!

Gavin: Thanks for having me. What city are you in?

Gavin: I played Missoula 5 years ago. It was in a theater and behind the theater there’s a bicycle path and I remember a walking bridge.

Gavin: Oh man, I loved it there. It’s surrounded by mountains and I remember the golden grass. It’s a beautiful place. Made me want to buy a place there. When I was there I said, “Man, I should buy a place here,” and people were like, “Yeah, Oprah just bought a place here.”

Kat: You gotta come back!

Kat: Before we get too far gone here, I want to wish you a happy early birthday on Feb. 4!

Kat: I read your horoscope for today…

Kat: … and it said that you are very sensitive to others today, so you should steer clear of hospitals or police stations because you may take on others’ pain.

Kat: I know! Several of your horoscopes also said that today you have “over-share syndrome.” So I just want you to know that if you’re in the mood to over-share, you’ve come to the right place…

Gavin: Oh, my word. As long as it’s not influenza, right?

Kat: Yeah, we don’t want to over-share that. Let’s talk about the contest that you’ve partnered with Folgers Coffee on.

Gavin: Yes, let’s talk about it. (Beeping from a large truck backing up is in the background.) I’ll talk about it while there’s a truck with its reverse beeping going…

Kat: I was hoping you’d stand next to a really loud dump truck while it was in reverse!

Gavin: I know! What is going on? This is just strange. But anyway, Folgers has this iconic jingle that they’ve had on TV for years. The premise is kind of amazing in that it’s a contest for undiscovered talent around the country, and they can submit their version of the song. It gets put on the website, and people can vote for their favorite version. The winner will get $25,000 and the ad campaign. I think it’s an amazing opportunity for undiscovered talent to get their voice out there, to be heard. I know the value of having an opportunity being given to you, and that’s why I wanted to be a part of the campaign. (The contest runs from Jan. 22 to March 6, 2013. Visit www.folgers.com/jingle for more information.)

Kat: Fantastic! Are you a big coffee drinker, by the way? Is the best part of you waking up to Folgers in your cup?

Kat: Speaking of contests, part of the formula of talent shows like American Idol and The Voice are stories of adversity. Is there a part of your up-and-coming story that makes you relate to these talent-show hopefuls?

Gavin: Absolutely. There’s really nothing like being given an opportunity when you’ve been hoping for one for so long. It’s really an artist’s responsibility to take as many of those opportunities as they can to increase their chances of success. At the end of the day it’s your destiny and you owe it to yourself to take every opportunity that you can.

Kat: So what was a big defining career moment for you, other than playing the Wilma Theatre in Missoula?

Gavin: I would say the opportunity to play my music on television. It’s a very powerful thing.

Kat: The music video for your duet with Colbie Caillat, We Both Know, is being released today. There’s been so much speculation about you and Colbie dating, I’m assuming the content of this video will spin that speculation out of control?

Kat: The boat scene? Excellent. This song was written for the upcoming Nicholas Sparks movie, Safe Haven. I’m dying to know — are you a closet The Notebook fan? You can admit it here. You’re among friends.

Gavin: Listen, what man has not cried alone over The Notebook?

Kat: Alone, in his apartment, in his underwear, eating Doritos…

Gavin: Exactly. Crying alone into a bag of chips.

Kat: So what does 2013 hold for you? Do you have any tours or cool vacations coming up anytime soon?

Gavin: Oh, all of it for sure. Hopefully, I’ll release the next record a little bit ahead of schedule so I can travel and spend some time in some places that I’ve seen but didn’t have time to stay in, and maybe see some places I haven’t seen just yet.

Kat: Perfect. So if Missoula hits that list of places you go back to, let me know and I’ll show you around.

Gavin: That sounds like an incredible idea. We’ll have some coffee.