The Walking Dead‘s done keeping Andrea in the dark. When the show returns, she’ll be brought up to speed on the horrors of Woodbury. Andrea will be enlightened, armed and dangerous. 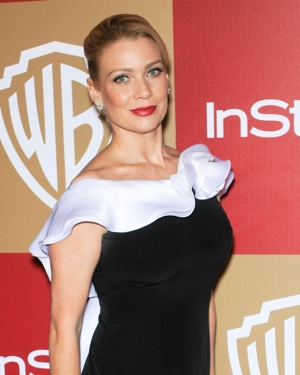 We’re only weeks away from The Walking Dead‘s midseason premiere. The drama left us with an epic cliffhanger. Daryl (Norman Reedus) and his big brother Merle (Michael Rooker) were forced to fight each other — gladiator style. And Andrea (Laurie Holden) watched in horror.

While their lives hang in the balance, Andrea is shocked by The Governor’s (David Morrissey) despicable behavior. His treatment of Daryl underscores the devious side viewers have seen for months.

According to The Hollywood Reporter, expect Andrea to have a new outlook on The Governor.

Holden explains, “Andrea’s eyes are now opening; she had no idea that Rick and the others were still alive. Now she’s learning that the group is not only alive but that one of her friends has been captured by the man she’s been romantically involved with. Her head is exploding.”

Now that Andrea knows the truth, what’s her next move? She’s stuck between a rock and a hard place. But don’t count her out. Holden insists Andrea isn’t as blind as some might think.

“Andrea has a really good sense of character, and she loves Rick’s group,” she adds. “She doesn’t know they’re at the prison, so she’s got a lot of catching up to do. But I can guarantee you that what she does, her heart is in the right place.”

How do you think Andrea will react to the truth?