Mariel Hemingway’s facing the family curse head-on. The granddaughter of acclaimed author Ernest Hemingway has opened up about her mental illness fears, suicide and her new documentary, Running from Crazy. 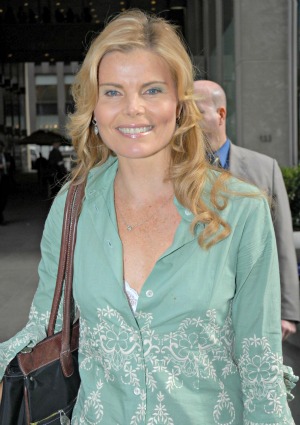 Mariel Hemingway fears her famous family has something dreadful in common with the Kennedys: a curse. Rather than keep quiet, however, the actress has given her lineage the documentary treatment in Running from Crazy.

“We were, sort of, the other American family that had this horrible curse,” Mariel Hemingway recently told CNN of her family’s history of mental illness and suicide.

You may recall the 51-year-old’s grandfather, famed author Ernest Hemingway, killed himself months before she was born, and her sister Margaux died of a barbiturate overdose in 1996. In total, seven members of the star’s family have taken their own lives.

“Knowing that there’s so much suicide and so much mental illness in my family, I’ve always kind of been ‘running from crazy,’ worried that one day I’d wake up and be in the same position,” she is quoted as saying in the film.

“Suicide has no rhyme or reason,” Hemingway continued. “Some people think about it for years and plan it. Some people, it’s 20 dark minutes of their life that they decide to take their life that comes out of the blue. It’s very random, it’s very frightening.”

Why make a documentary focused on her family’s dark past? Mariel Hemingway hopes Running from Crazy will give people everywhere permission to express their own “stuff,” to realize they’re “not alone in the world of dysfunction.”

“I think people need to talk about it a lot,” the actress, who says she is happy and healthy today, explained. “Making it OK that it’s in your family… It doesn’t shame anyone, and it doesn’t make anybody’s family an ugly, bad family.”

Here’s a look at Mariel Hemingway chatting about her documentary, which premiered Sunday at the Sundance Film Festival, at the Silver Linings Playbook premiere: