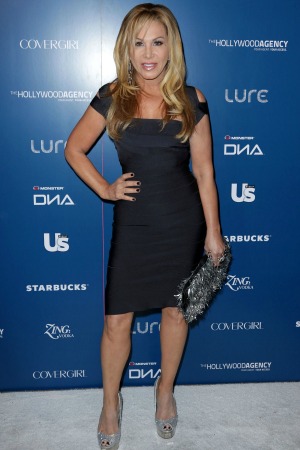 It looks like someone wants to take Demi Moore’s cougar title away from her. The latest lady to join the older woman/younger man list is The Real Housewives of Beverly Hills star Adrienne Maloof.

Over the weekend, the reality star was spotted at the fancy Beverly Hills restaurant Crustacean with rocker Rod Stewart‘s son Sean. The couple were snapped by the paparazzi and engaged in a little PDA for the cameras.

The 51-year-old multi-millionaire, who just worked out a divorce settlement with her plastic surgeon husband Dr. Paul Nassif in November, seems to be having fun and spreading her wings. Her 32-year-old date is best known for the reality show he starred in, Sons of Hollywood, back in 2007 on A&E, and Season 2 of Celebrity Rehab with Dr. Drew in 2008.

While the romance may not be a forever thing, a source told Us Weekly, “He’s really good with her kids, and she thinks it’s fun to be with a younger guy.”

Maloof has three children from her 10-year marriage to Nassif: sons Gavin, 9, and twins Colin and Christian, 6.

The source continued, “At the moment, it’s not serious with Sean, they’re having fun right now.”

What does Nassif think about his ex-wife’s May-September romance? Well, it seems like there are no worries at all since Us Weekly‘s source revealed, “Paul is also dating a much younger woman.”

The demise of the couple’s marriage is currently being chronicled on Season 3 of the Bravo TV reality show.