Prince Harry is done with his second tour in Afghanistan and is talking about the horrors of war. 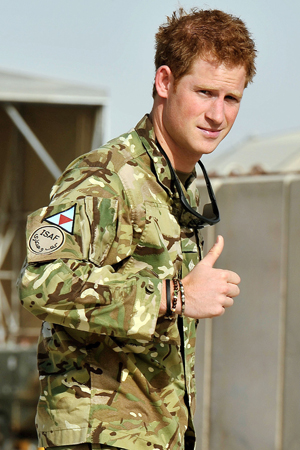 Prince Harry is finished with his second tour in Afghanistan.

The Apache helicopter captain confirmed his departure from the Middle Eastern nation during an official interview Monday afternoon. He was stationed in the southern Helmand province, a Taliban stronghold.

The biggest revelation of his nearly four months of service: He admitted to killing members of the Taliban on his final day of fighting.

“Our job out here is to make sure the guys are safe on the ground and if that means shooting someone who is shooting at them, then we will do it,” he said in an interview. “It’s not the reason I decided to do this job. The reason to do this job was to get back out here, and carry on with a job.”

But, now — on to lighter topics, like Kate Middleton’s pregnancy!

The 28-year-old’s interview about sister-in-law Kate Middleton was finally released. Naturally, he’s thrilled about having a little niece or nephew in July.

The interview, conducted after the news went public in December, was kept under wraps until he left active duty.

Prince Harry: The Queen is funnier than me >>

“I spoke to my brother and her, and they’re both very well and both very happy, obviously,” he said of learning about the pregnancy. “I think it’s very unfair that they were forced to publicize it when they were, but that’s just the media for you.”

So, will the red-headed rebel settle down any time soon? Sounds like that’s a big ol’ “no” — he still has a few royal oats left to sow.

“I don’t think you can ever be urged to settle down,” he said. “If you find the right person and everything feels right, then it takes time, especially for myself and my brother.”

Taliban’s aim at Prince Harry gets troops killed
Did Prince Harry ride the white pony in Vegas?
Prince Harry: Not mad, but disappointed in himself