Daniel Radcliffe is leaving Harry Potter far, far behind him with his new film about the life of beat poet Allen Ginsberg, which prominently features gay sex scenes with the young star. 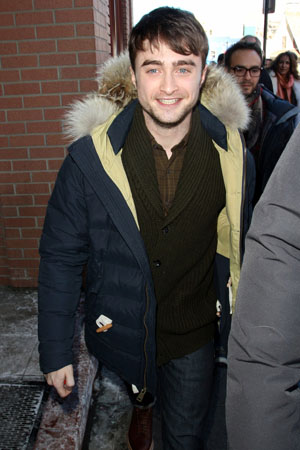 “Radcliffe simply asked, ‘John, you’re gay. How does this work?'” the director told the Associated Press after Kill Your Darlings premiered at Sundance, to the audible jaw-droppings of an audience more used to seeing Radcliffe on a Quidditch broom than naked in the arms of another man.

Daniel Radcliffe and Jon Hamm take a bath together >>

“I’m not kidding,” continued Krokidas. “And so perhaps there was a little dry run-through,” Krokidas told the AP.

In the film — which chronicles an obscure chapter in Ginsberg’s life long before he became the famous beat poet celebrated for “Howl” — Radcliffe is nude for an explicit man-on-man sex scene, makes out passionately with co-star Dale DeHaan (whom you may remember as the creepy guy in downbeat superhero flick Chronicle), and gets physical with a library clerk right there in the book-atorium, while DeHaan’s character, Lucien Carr, looks on.

Daniel Radcliffe is about to weird you out >>

Kinky! In real life, Ginsberg and Carr were friends at Columbia University, the same place where Ginsberg met his most famous beat cohorts, Jack Kerouac and William S. Burroughs. In the film and in real life, Carr was involved with the murder of an older man who was obsessed with him; Kerouac and Burroughs were arrested as material witnesses.

Ginsberg later began a novel about the killing called The Bloodsong, but abandoned it after a professor told him it would cause trouble for both Carr and Columbia.

Seems an odd match for young, relatively squeaky clean Radcliffe, but that’s probably the point: to leave Harry Potter as far behind as possible.

The AP also reported that at the Friday premiere of Kill Your Darlings, teenage girls from the high school near the theater rushed over after classes were dismissed for the day, trying to catch Radcliffe leaving the theater.

Awesome, said Radcliffe. “I don’t care why people come and see films,” he told the AP. “If they come and see a film about the beat poets because they saw me in Harry Potter, fantastic. If I can help a film like this get attention, that’s — without doubt — that’s a great thing.”