In an historic first, President Obama promised to focus on gay rights, women’s rights and climate change along with immigration and the economy during his inauguration speech. 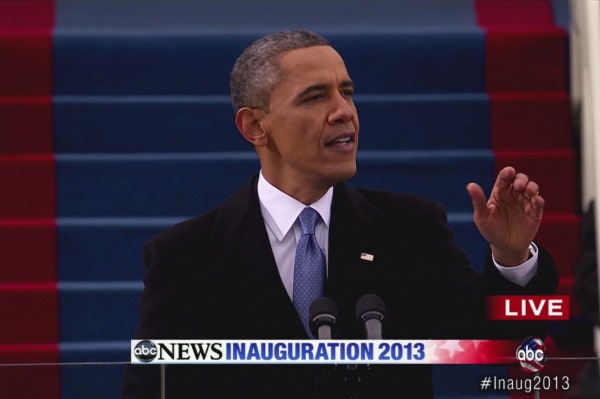 President Barack Obama took the oath of office for his second term today resting his hand on the Bibles of Martin Luther King Jr. and Abraham Lincoln before promising to focus on what many are calling the new civil rights movement: Life, liberty and the pursuit of happiness not just for the wealthy and privileged but for the middle class, gays and women too.

Referencing Seneca Falls, a watershed 19th century women’s rights convention, Selma, the site of a violent attack on civil rights marchers in 1965 and Stonewall, the site of a violent police raid and gay uprising in 1969, Obama said, “It is now our generation’s task to carry on what those pioneers began. [W]e have always understood that when times change, so must we; that fidelity to our founding principles requires new responses to new challenges; that preserving our individual freedoms ultimately requires collective action.”

Michelle Obama mixes high and low fashion for the inauguration >>

“We, the people, declare today that the most evident of truths — that all of us are created equal — is the star that guides us still; just as it guided our forebears through Seneca Falls, and Selma, and Stonewall; just as it guided all those men and women, sung and unsung, who left footprints along this great Mall to hear a preacher say that we cannot walk alone; to hear a King proclaim that our individual freedom is inextricably bound to the freedom of every soul on Earth.

“Our journey is not complete until we find a better way to welcome the striving, hopeful immigrants who still see America as a land of opportunity, until bright young students and engineers are enlisted in our workforce rather than expelled from our country.”

10 Facts to share with your kids about the presidential inauguration >>

The president’s focus on equality was particularly poignant as the country celebrates Martin Luther King Day.

Obama also specifically discussed climate change, a topic not touched upon during any of the presidential debates. “We will respond to the threat of climate change, knowing that the failure to do so would betray our children and future generations,” he said. “Some may still deny the overwhelming judgment of science, but none can avoid the devastating impact of raging fires and crippling drought and more powerful storms.

“The path towards sustainable energy sources will be long and sometimes difficult. But America cannot resist this transition; we must lead it. We cannot cede to other nations the technology that will power new jobs and new industries; we must claim its promise. That’s how we will maintain our economic vitality and our national treasure — our forests and waterways, our croplands and snow-capped peaks. That is how we will preserve our planet, commanded to our care by God. That’s what will lend meaning to the creed our fathers once declared.”