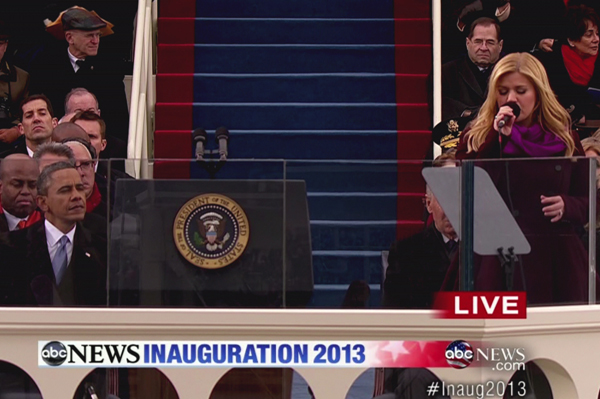 Beyoncé didn’t let a crowd of millions stop her from ripping out her audio earpiece mid-song during her performance of the national anthem at President Barack Obama‘s second inauguration.

Blue Ivy Carter’s mom looked gorgeous in a Christian Dior coat and shoes, a floor-skimming Pucci dress and $8 million in Lorraine Schwartz emeralds as she performed for President Obama. She’s performed for the president on several occasions, but said this time made her nervous.

“Every time I am overworked and in a stressful situation, I always think about moments like this,” she told Zap2It last week. “And it makes everything worthwhile.”

“I can’t really think about it until it is over,” she added. “It is too much! There is no way I would be able to sing.”

Well, she was able to sing — and she sounded incredible. Not an easy feat for the chilly Washington, D.C. weather.

But she wasn’t the only performer to rock the inauguration. Both James Taylor and Kelly Clarkson gave their patriotic best during the live ceremony.

Michelle Obama mixes high and low fashion for the inauguration >>

“Wow ….I was incredibly nervous and cold ha! I just wanna officially thank President Obama for opening for me haha! Just kidding,” Clarkson tweeted after the show. The newly engaged singer was an open supporter of Ron Paul during the 2012 election, though that didn’t stop her from giving her all to “My Country ‘Tis of Thee.”

“What an honor to be a part of history! Obama’s presence was powerful and his words unforgettable. It’s a proud day for America!” she added.

What did you think of President Obama’s second inauguration?