In order to save his sister, Aiden must murder an unsuspecting victim. But when his plan interferes with Emily’s, will it end their romance? 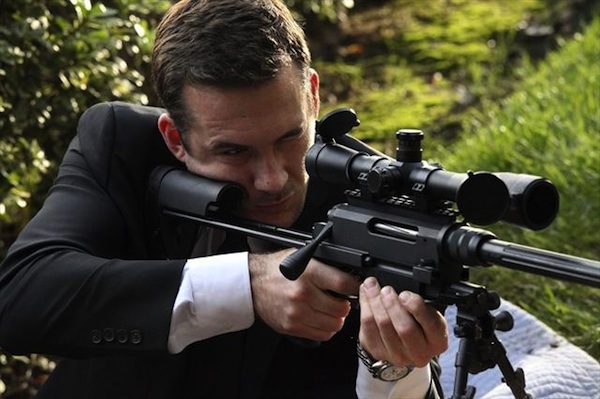 Despite what the trailer for this week’s episode led us to believe, Emily (Emily VanCamp) did not sleep with Daniel (Joshua Bowman). We can all breathe a sigh of relief that she isn’t willing to go that far. However, sleeping with someone to get what she wants is something Victoria (Madeleine Stowe) is willing to do.

Helen Crowley secretly met with Aiden (Barry Sloane) to show him a video of his sister. Who knows when it was made, but it shows her alive, held captive and a drug addict (which we can only assume is something the Initiative forced her into). Aiden has 24 hours to do the Initiative’s dirty work, or his sister dies. His task? Kill Victoria Grayson.

Sleeping with the enemy

Emily jets to L.A. with Daniel to assist him in closing the Stonehaven deal, and Victoria is only a few steps behind, hoping to sabotage him. Victoria actually seduces Daniel’s competition, Prosser, so he won’t walk out on the deal. Prosser’s always been in lust with her, and she believed giving him what he wanted would save her son from the Initiative. We can only assume they slept together, and if they did, is this the least selfish thing Victoria has ever done?

Emily’s feeling guilty for leading Daniel on and hurting Aiden in the process, so she gives him all the information he needs to land the Stonehaven deal. This puts Daniel on the map as a businessman, but it may lead to the Initiative completely erasing him from the map once they find out.

More secrets are uncovered when Emily and Nolan figure out what Aiden is up to. Aiden is a split second away from assassinating Victoria when Emily stops him. She convinces him not to be the Initiative’s errand boy and to find a different way to save his sister. Emily’s the only person he trusts, so he takes her advice. Maybe a bad move?

Back in the Hamptons, Aiden receives a video showing his sister overdosing. He’s led to believe she’s dead and he blames it all on Emily. It is, after all, in Emily’s best interest for Victoria to stay alive. Then he does what he swore he wouldn’t do: He leaves her again to track down his sister and find the truth.

A few things you should know

Daniel was on to Emily the whole time. He knew Victoria had asked her to rekindle their romance to keep an eye on him. He just wanted to see how far she would take it. Kind of a jerk move, but probably well-deserved after what she did to him.

Also, Nolan figured out Padma is working against him and trying to get his program Carrion for the Initiative. But instead of kicking her out, he’s turning the tables and spying on her to get more info. It’s sad, because he really loved her and now he just seems lonely again.

And finally, Charlotte just turned 18, and she’s changing her last name to Clarke. The Graysons are not happy about it.