Justin Bieber posted an Instagram picture over the weekend in which he flashed his tiny heinie. The picture was swiftly deleted, but everything lives forever on the Internet. 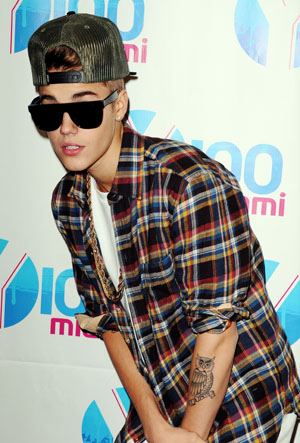 If you ever wanted to see Justin Bieber indecently exposed, looks like you just missed your chance.

The “As Long As You Love Me” singer tweeted an Instagram photo of himself Saturday in sunglasses and a camouflage cap, with his back to the camera and his pants pulled down to expose approximately 4 inches of Bieber butt.

The tweet was captioned simply #moon, and had won thousands of likes before being taken down in just a few minutes, The New York Daily News reported.

Bieber’s manager, Scooter Braun, wasn’t disturbed by his famous client’s indiscretion, apparently: “As a prankster u have to respect another good prank. only makes sense. #crackdealer,” Braun wrote.

If Bieber intended the mooning as a follower-gaining stunt, it totally worked: He gained almost 18,000 new followers on Sunday, putting him at a grand total of 33,290,909 followers, just below Twitter Queen Lady Gaga, who has 33,296,395.

The photo also exposed another Bieber asset that’s been getting attention: One of his 10 tattoos, an astonishing total for someone just 18 years old.

In the butt-shot, viewers can see the Indian head inked on his left shoulder blade; it’s the symbol of Canadian hockey team the Stratford Cullitons. “My grandfather always took me to the stratford culliton every friday night,” the singer wrote on Instagram. “This is for u Grampa.”

Elsewhere on his body, Bieber has the word “Believe” on his left arm (because tattooing yourself with the name of your latest album, that’ll never get old, right?), the Japanese Kanji symbol for music on his right arm, his mother’s birthdate on his chest, an image of Jesus Christ on his right calf, a giant owl on his left forearm, a crown on his upper right chest, praying hands on his left calf, a bird on his hip and the word “Yeshua,” the Hebrew word for Jesus, on his ribcage.