When measuring risk, we factor in odds and statistics. Given Alec’s reputation for “losing it,” is the decision for him to host the SAGs a calculated risk, or a risky gamble? Let’s take a stroll down memory lane to determine the odds of Alec freaking out while onstage at the SAGs… 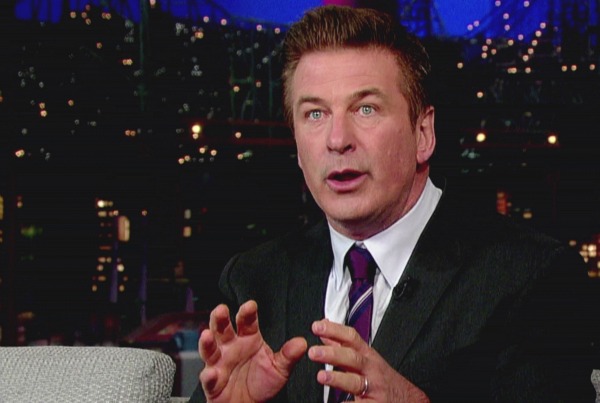 So is he a thoughtless pig, or not?

We all remember when Baldwin had a baby fit when daughter Ireland wasn’t taking his calls, leaving her a voice mail in which he called her a “thoughtless little pig.” We checked, and we couldn’t find reference to this in the How to Successfully Parent a Young Girl book. Still, little Ireland is all grown up and told Page Six Magazine that everyone blew that incident way out of proportion and that her dad has “said stuff like that before just because he’s frustrated.” (We’re still wondering how this voice mail became public. Did ex-wife Kim Basinger leak it to the press? Was someone within earshot when Alec blew his lid?) If Ireland doesn’t think it’s a big deal, then why do we?

Twitter’s not for everyone

By now we’ve become used to Alec’s twitter rants, typically followed by a temporary deletion of his account. One of the most memorable was when Baldwin and his not-quite-wife Hilaria Thomas were obtaining a marriage license in New York City. Afterward, the couple was landed on by paparazzi and Baldwin responded with one of his trademark uncaged-gorilla shoving acts with a photographer. He immediately tweeted, “A ‘photographer’ almost hit me in the face with his camera this morning. ?#allpaparazzishouldbewaterboarded.” This incident took place in June of 2012. In early July, Alec was receiving recognition for his incredibly generous $1 million donation to the NY Philharmonic. So what’s this guy’s deal? Is he a rager with heart? Is he all bark and bite, but with a side of conscience? It’s all so confusing.

Yes, I’ll take an iced coffee… in the face

By August, funnyman Alec was up to his old tricks. He not only did a drive-by iced-coffee launch at a group of teenage kids (that actually is kind of funny), he bragged about it! In a web series with Jerry Seinfeld, Baldwin admits, “I went whoosh and I threw it right into the window of the car. It went whoosh and it was the greatest moment of my entire life. It literally hit him in the chest and the liquid went whoosh, all over. I got all three of them and sprayed them with the coffee.” While the imagery this tale conjures up is giggle-worthy (can you imagine the look on those kids’ faces?), should we be concerned that this is “the greatest moment” of this grown man’s life? Once again, Baldwin showed us a softer side when he participated in SNL’s tribute to Sandy Hook Elementary School after the massacre in Newtown, Connecticut.

So can he be trusted behind the SAG mic for an entire awards show? From where we’re sitting, it seems there’s about a 50/50 chance that Baldwin can behave himself for an evening of hosting. There is one thing we can bet on for sure: Alec Baldwin will be hilarious.