In Season 3, Episode 3 of Downton Abbey, Ethel decides to give up her son, Charlie, while creepy valet Thomas lusts over the new footman, Jimmy. 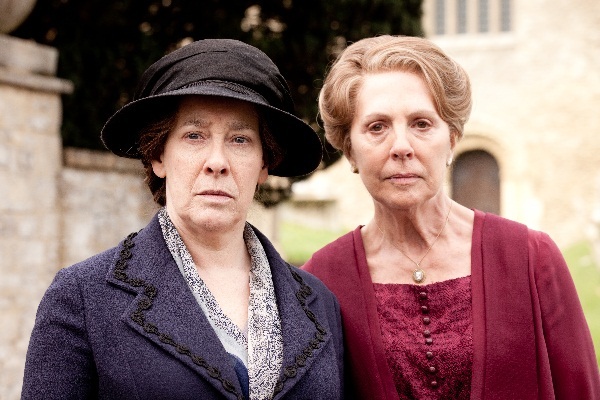 Downton Abbey Episode 3 begins with Anna Smith (Joanne Froggatt) deeply concerned over missing letters from her incarcerated-for-murder husband Mr. Bates (Brendan Coyle). Anna explains to Mrs. Hughes (Phyllis Logan) that Bates’ usually timely letters have stopped and it’s been weeks since she’s last heard from him in prison. Mrs. Hughes reassures Anna that Bates is not attempting to distance himself, but is unable to offer any reason why Bates’ letters have stopped.

We then see Bates deeply depressed in prison as he has yet to receive any letters from Anna. A fellow inmate informs Bates that his contraband prank — pulled in last week’s episode — did not sit well with a few corrupt prison guards and Bates is now listed as a “violent prisoner.” As a consequence, Bates’ mail is being held.

Later, Isobel Crawley (Penelope Wilton) meets Mrs. Hughes downstairs in the servants’ quarters to discuss the sensitive subject of the former Crawley maid-turned-prostitute Ethel Parks (Amy Nuttall). Mrs. Crawley explains Ethel has sent her a letter intended for Mrs. Hughes. Mrs. Hughes learns Ethel changed her mind regarding her son Charlie’s future: She wishes to give him up to his wealthy but mean grandparents — Horace and Daphne Bryant (Kevin McNally and Christine Mackie) — the parents of Charlie’s dead father, Major Charles Bryant (Daniel Pirrie). Mrs. Hughes decides to write a letter to the Bryants to gauge their interest in accepting their grandson.

Charlie’s grandparents meet with Ethel and Mrs. Hughes at Mrs. Crawley’s home. At first, the Bryants offer Ethel money while Horace blatantly shames Ethel for her work as a prostitute. During a break for tea, Mrs. Hughes believes it’s best for Ethel to let Charlie go with his wealthy grandparents while Mrs. Crawley maintains her ideals that Ethel’s love is best for Charlie. Ethel tries to explain to Mrs. Crawley the quality of life Charlie can have with a wealthy family, but the realistic connection is lost. In the end, Ethel makes the heartbreaking decision to let Charlie leave with his grandparents.

Downton Abbey receives a new footman candidate, Jimmy (Ed Speleers) who wins over the female maids’ hearts with his good looks. Jimmy even catches the eye of Thomas (Rob James-Collier). The butler and head of staff Mr. Carson (Jim Carter) likes Alfred (Matt Milne) for the position instead given his work ethic, but is directed by Lady Mary Crawley (Michelle Dockery) to hire the handsome candidate to increase servant morale. Mr. Carson makes a quip about Alfred’s relation to Ms. O’Brien (Siobhan Finneran) and the position is officially given to Jimmy.

We then see Mr. Bates plan a scheme with a fellow inmate designed to get revenge on his horrible roommate and back in favor with the prison guards although it’s unclear what exactly is to take place. Mr. Bates directs his inmate friend to have a guard stop by his cell a certain time. Mr. Bates’ cell is raided as planned and contraband found under his roommate’s bed. Mr. Bates smiles as the prison guard takes the contraband.

Kitchen maid Daisy (Sophie McShera) spends some time with her late husband William’s (Thomas Howes) father Mr. Mason (Paul Copley) at his farm. Daisy asks Mr. Mason if he approves of her dating a new boy, seemingly Alfred, and if he thinks it’s appropriate for her to tell Alfred how she feels. Mr. Mason gives Daisy his blessing, but says he’s unsure about the new, modernized role of women in British society. Mr. Mason simply advises Daisy to be pure and choose her words carefully.

Is Season 3 the last of Downton Abbey? >>

As the episode comes to a close, we see Mr. Bates receive a large stack of letters from Anna delivered by a prison guard. Mr. Bates inquires why they were not delivered and how he got on the officer’s violent prisoner list. The prison guard doesn’t answer and merely implies Mr. Bates is no longer blacklisted.

Back at Downton Abbey, Anna receives a large pile of letters from Mr. Bates and when Mrs. Hughes inquires why there are so many at once, Anna only remarks she is simply happy to have them. The episode closes as Mr. Bates and Anna read each other’s letters with tears of joy and sadness.

Watch a clip of Episode 3 of Downton Abbey below: