Barbara Walters remains hospitalized after suffering a hard fall Saturday night. Despite having a cut on her head, reports state the veteran journalist remains very much in charge! 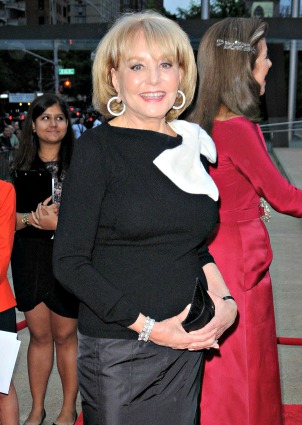 Thankfully, along with word of the scary incident comes reassurance that Barbara Walters’ health is already on the mend.

“Barbara Walters fell on a stair last evening while visiting the British Ambassador’s residence and the fall left her with a cut on her forehead,” a spokesperson for ABC News said of The View co-host’s hospitalization.

“Out of an abundance of caution, she went to the hospital to have her cut tended to, have a full examination and remains there for observation. Barbara is alert (and telling everyone what to do), which we all take as a very positive sign.”

Barbara Walters to Chris Christie: You’re too fat to be president >>

Walters’ ability to remain the boss, even while stuck in a hospital bed, may be humorous, but it’s important not to take word of the 83-year-old’s injuries too lightly.

TV Newser reports Walters had arrived in D.C. in order to contribute to ABC News’ coverage of events surrounding President Obama’s second inauguration, but will now not be on-air Monday. It is also unclear when, exactly, she will be released from the hospital.

Despite her octogenarian status, Barbara Walters keeps a very busy work schedule, appearing regularly on The View, 20/20 and primetime interviews and specials, including the annual Barbara Walters’ 10 Most Fascination People.

Barbara Walters special: How, exactly, is that fascinating? >>

Well-wishes have been pouring in for the journalist, including this message from fellow television regular Julie Chen, sent via Twitter: “Get well soon @BarbaraJWalters. Sending you love. Plus the network needs you!”

Leave your own well-wishes for Barbara Walters in the comments below!