The Amazing Spider-Man sequel will have a double dose of beauty. Not only will Emma Stone reprise her role as Gwen Stacy, but she’ll be joined by newcomer Shailene Woodley. The actress is “stoked” about the film and can’t wait to work with the cast. 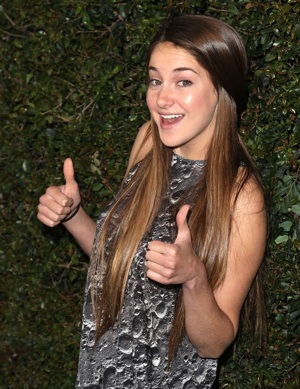 Last year, Sony Pictures rebooted their popular Spider-Man series. The hero got a modern makeover with Andrew Garfield, who shared the screen with real-life love Emma Stone. In 2014, the duo will return for another adventure — with a new threat.

Rumor has it that Oscar-winner Jamie Foxx is set to player Spider-Man’s latest nemesis, Electro. But he won’t be the only one standing in the way of the hero’s happiness. For those of you familiar with the comics, you know Gwen Stacy isn’t the sole love of Spider-Man’s life.

Cue the other woman! The sequel will present the feisty red-head Mary Jane Watson. The role will be played by Shailene Woodley, who recently spoke to MTV about the part.

“Spider-Man has always been my favorite super hero dude, since I was a little girl. I think there’s something really special about flying. When I watched the previous Spider-Man [with] Andrew Garfield, he made me feel invincible,” she said. “I think Marc Webb is amazing. I’m so stoked to work with Andrew and Emma.”

They haven’t begun filming, so Woodley’s still in the dark about some of the story. “Honestly, I don’t know too many details about the film yet. But yeah, we’ll see.”

Foxx and Woodley aren’t the only newcomers. Dane DeHaan (Chronicle) also joined the cast as Harry Osborn. The role was previously played by James Franco, while Mary Jane was tackled by Kirsten Dunst in Sam Raimi‘s Spider-Man trilogy.

The Amazing Spider-Man sequel is scheduled to hit theaters May 2, 2014.