All eyes are on Lance Armstrong. The athlete’s been hit with a wave of bad publicity, thanks to his drug scandal. As he takes to the airwaves (with Oprah) to explain himself, producers are looking to adapt his story. Get ready for Lance Armstrong: The Movie. 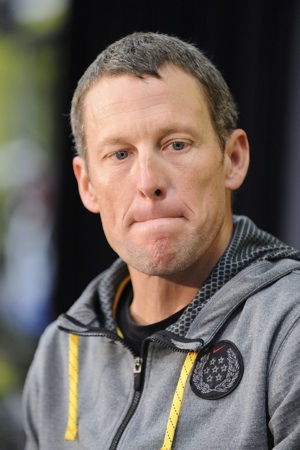 Oh, how the mighty have fallen. Over the past few months, Lance Armstrong has been the talk of the town. Unfortunately, it’s for all the wrong reasons. The famous cyclist was stripped of his medals amidst doping allegations, which he finally admitted to last night.

The world watched as Armstrong sat down with Oprah Winfrey for part one of an explosive interview. Interest in the scandal is at an all-time high, and therefore, Hollywood has come a knocking.

According to The Hollywood Reporter, producer-director J.J. Abrams is looking to turn Armstrong’s story into a feature film.

Lance Armstrong to confess to doping, apologizes to Livestrong >>

Abrams’ production company, Bad Robot, and Paramount have acquired the rights to the upcoming book, Cycle of Lies: The Fall of Lance Armstrong. It’s written by New York Times sportswriter Juliet Macur and is scheduled to hit shelves this June.

“Macur covered cycling and Armstrong for the Times from his recovery from cancer through his seven Tour de France victories to the inquiries surrounding his use of PEDs.”

Several other producers have tried to bring Armstrong’s story to life, but they never made it past the development stage. Perhaps Abrams will have better luck?

Armstrong’s interview with Winfrey pulled 3.2 million viewers with its initial airing. The repeat earned an additional 1.1 million, bringing a total of 4.3 million viewers for the night. It gave the once-struggling network a major boost.

Oprah and Lance Armstrong: The Worldwide Exclusive Part 2 airs tonight at 9/8c on OWN.

Are you interesting in watching a movie based on Armstrong?