Will there be singing at this year’s Oscars? According to the latest rumors, audiences may see a group number from the cast of Les Misérables. 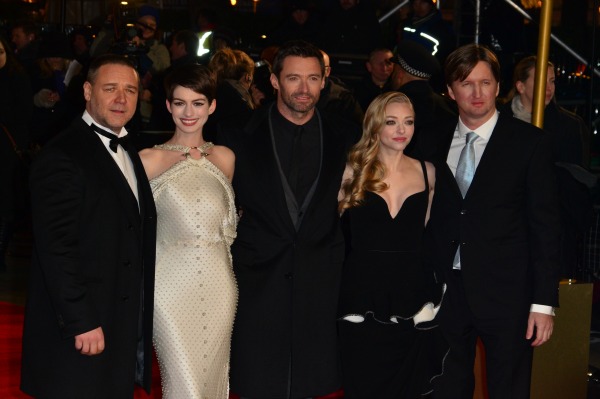 Will there be music numbers at this year’s Academy Awards? Well, according to hints dropped by Les Misérables star Samantha Barks in an article in Britain’s Daily Mail, this might be true.

The young star is currently on the road in a touring production of the musical Oliver!, so she was unable to join the rest of the cast at last week’s Golden Globes. However, she has been given permission to attend the 85th Annual Academy Awards and miss a few days of her show.

The British paper is reporting that the cast will possibly perform together in one of the ensemble numbers like “One Day More”, or “Do You Hear The People Sing.” The other rumor about the performance is that a medley of greatest hits from Les Mis might happen with each of the soloists taking a moment in the spotlight. This might involve Anne Hathaway‘s breathtaking “I Dreamed a Dream”, Barker’s “On My Own, Hugh Jackman‘s “Bring Him Home”, or Who Am I?”

If this news turns out to be true, it would be exciting for the Oscars audience, both in the theatre and at home. Last year’s ceremony failed to include any musical numbers, even though two colorful tunes were nominated for Best Original Song from The Muppets and the animated film Rio.

What is true is that this year’s executive producers, Craig Zadan and Neil Meron, promise a real variety show. When SheKnows attended the Oscar Nominations on Jan. 10, we had a chance to speak with both of the producers about the show.

Zadan shared some insight about the Feb. 24 ceremony with SheKnows: “We decided we were going to do a show about celebrating the movies rather than wait for the nominations to come out. Now that the nominations are out, we can incorporate the movies that are nominated into our show but we’re going to be a very, very entertaining show this year.”

Meron also added, “There’s been criticism in the past about The Academy being very stuffy and mired in tradition, but I think what we’re doing…  is kind of blowing some of the cobwebs and dust away and allowing this to really be relevant.”

If the news about the Les Mis cast — and the rumor that Adele will sing the Oscar-nominated Skyfall , is true — this stands to be one of the most-talked about Academy Awards shows in decades.