Is Lindsay Lohan an escort? Michael Lohan says Lindsay’s mom, Dina Lohan, is pimping out Lindsay to pay for their high-priced lifestyle. 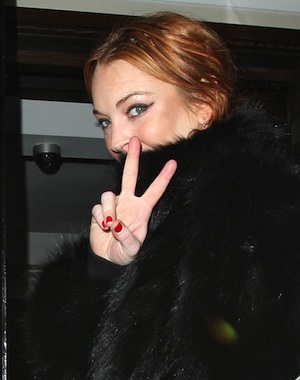 Lindsay Lohan as a high-priced escort? The rumor that Lohan might be an escort for wealthy men is gaining ground thanks to Lindsay’s dad, Michael Lohan, who recently told the tabloid Star that he believes she’s resorting to such lengths to maintain her lifestyle. Star says Michael Lohan told them, “She is getting paid to date rich men, Dina is pimping her out — it’s disgusting.”

The news that Lindsay Lohan could be an escort first came to light on Wednesday. Gawker picked up Star magazine’s story about Lohan and published the reported history of a few rich men who say they paid an escort service to secure Lindsay Lohan as their date. To be clear: the story does not allege Lindsay Lohan has sex with men in exchange for money. Star says Lohan gets paid around $100,000 for major events and was rumored to have spent New Year’s Eve in London, England with Prince Abdul Azim of Brunei. RadarOnline also ran the Lohan escort story.

Michael Lohan has since retracted his statements and told TMZ he doesn’t know where Star is getting their information from since it certainly isn’t him. “By absolutely no means did I ever make such a statement,” he said to TMZ, and continued, “Sure, Lindsay and [other celebrities] make personal appearances and get paid for it! Sure, she and they get paid to go to birthday parties and other occasions! But for sex? Are you kidding me? I would never say that because she would never do that — it never happened.”

It gets ugly: Dina Lohan claims Michael Lohan raped her >>

Michael Lohan has a shaky reputation with daughter Lindsay, so we’re not entirely sure he isn’t splitting hairs. Star never accused Lohan of prostitution, they simply implied she was available to go on dates with wealthy men, a claim they say Michael Lohan confirms. Individual dates with men is not the same line of work as making an appearance at a club or restaurant for a major event.

Given Lindsay Lohan’s continued downward spiral — mentally and financially — we would not be surprised to find out Lohan is an actual escort sans sex. However, more evidence is needed to confirm such allegations.

What’s unfortunate for LiLo is that media outlets, at this point in her career, are actually running what would have been purely outlandish stories 10 years ago. Now, the public isn’t really sure where Lindsay Lohan’s rock bottom is.

Could Lindsay Lohan really be an escort?