Comcast is said to be so fed up with the Matt Lauer backlash over Ann Curry’s departure from the TODAY Show they allegedly told subsidiary network E! to stop cracking jokes at Lauer’s expense. 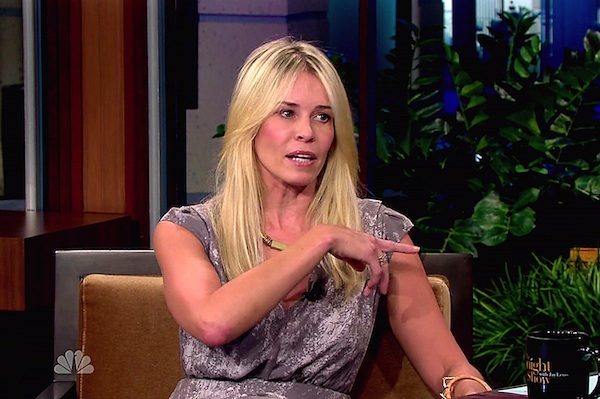 Chelsea Handler is reportedly in hot water with Comcast executives after her recent dig at Matt Lauer. Lauer is the current co-host of NBC’s the TODAY Show, while Handler headlines her own show, Chelsea Lately, on E!. Both networks are subsidiaries of NBCUniversal which is ultimately owned by the mass-media giant Comcast.

An exclusive source for the New York Post leaked to the newspaper that Comcast is unhappy with Handler’s recent portrayal of Lauer on a Chelsea Lately episode in which she makes a joke about Matt’s unhappiness — and some say unsupportive behavior — toward former co-worker Ann Curry.

During a recent show, Handler aired the now-infamous clip of Al Roker telling Dateline he pooped his pants at the White House. Chelsea then drew similar parallels to Matt Lauer and Ann Curry’s working relationship. Said Handler, “This isn’t the first time a TODAY Show cast member was in the news about this sensitive subject. For years it was common knowledge that Matt Lauer spent every morning s******* all over Ann Curry.” Ouch.

Why Ann Curry was fired from the TODAY Show >>

The source for the New York Post says Comcast is uneasy over the dig and would like to shift the public’s focus away from the fallout of Ann Curry’s dismissal. The story goes that Comcast executives told Chelsea Lately writers, including Handler, to avoid the subject of Matt Lauer and Ann Curry. Says the source, “Chelsea’s writers were warned to lay off Matt. They don’t want them making more fun of Matt and the Ann Curry situation right now.”

Watch the joke Chelsea Handler makes about Matt Lauer below: