Amanda Righetti, best known for her role on The Mentalist, has just welcomed a baby boy with husband Jordan Alan. 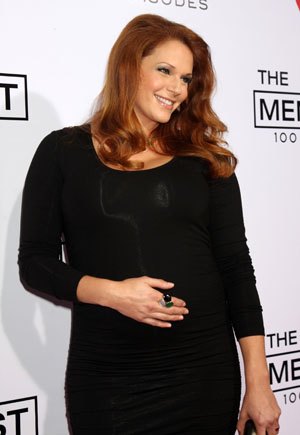 The new baby’s name is Knox Addison Alan; if those two first names sound familiar, it may be because Angelina Jolie and Brad Pitt used the name Knox for one of their twins (the other, of course, is Vivienne), while Addison is a very popular modern baby name, though usually for girls. Viewers may also know the name from a popular character on Grey’s Anatomy and Private Practice, Dr. Addison Montgomery.

Righetti — who is best known for her role on The Mentalist, though she also had pivotal parts on The O.C. and North Shore — and husband Alan (a producer on Kiss and Tell and the upcoming Cats Dancing on Jupiter) had opted to keep Knox’s gender secret in utero, joining a growing number of celebs to make that choice.

Celebrity moms who do it all >>

Holly Madison didn’t tell the gender of the baby she’s pregnant with, but boyfriend Pasquale Rotella accidentally let the cat out of the bag in October, tweeting a sonogram pic with the message “I already miss my girls.”

Singer Lily Allen, who tragically lost a baby in 2010, opted to keep the gender of her next baby private in utero: She gave birth to daughter Marnie Rose on Jan. 10.

With all these celebs keeping the gender of their baby as “a surprise” for family, friends and the public, can celebrity gender-reveal parties be on the way?

Josh and Anna Duggar (Josh is the son of super-breeders Jim Bob and Michelle Duggar) threw themselves a gender-reveal party of sorts in 2009 by cutting into a pink cake on the TODAY Show; what will attention-seeking currently pregnant ladies like Jessica Simpson come up with?