A family that publicly embarrasses themselves together stays together. 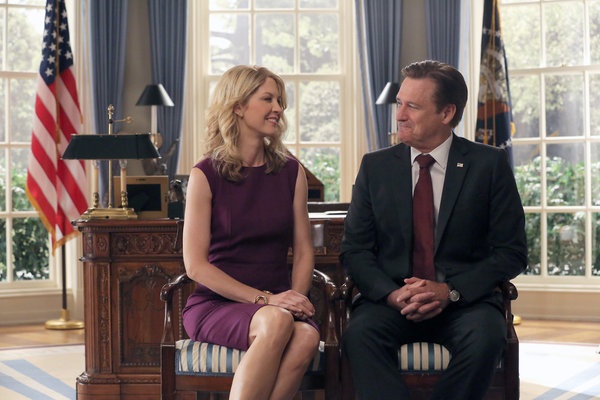 The White House has officially become filled with chaos, awkward proposals and an illegitimate child. Sounds like your typical American family.

Related story Jenna Elfman Loves to Have 'Funny, Random' Chats & Watch The Office With Her Boys

A few of Skip’s (Josh Gad) favorite things include pizza, ninjas and the lovely Stacy Kim that he’d like to bring as his date to the gala. He finally does get up the nerve to ask her out after imagining her as a slice of pizza (which he’d like to lick so no one else could have her), but she insists they’ll only attend the dance as friends. This. Is. Not. A. Date.

Despite his very best efforts to woo her with an embarrassing public proposal to make her his girlfriend, Stacy turns him down and breaks his fragile little heart. I think everyone can be proud that he showed restraint and didn’t offer an engagement ring on the first “not” date.

A different kind of proposal

First Lady Emily Gilchrist (Jenna Elfman) is having a heck of a time being seen as a respectable, intelligent woman and not a hot former dancer with good fashion sense. Emily runs into a bit more trouble when she meets chauvinist Senator Thorogood (Stacey Keach), who likes to say things like, “Don’t get hysterical, men are talking.”

After Emily delivers a well-deserved but mean rant, Thorogood turns down the first couple’s latest proposal on education. In an effort to win back his support, the president (Bill Pullman) and Emily make an over-the-top slideshow presentation of Thorogood at the gala. It doesn’t really work, so they resort to just trapping the Senator inside the gala so he can’t vote on the bill. Sometimes you just gotta do what you gotta do.

In surprising news, we discover that Becca used to date the president’s aide, Malloy. Malloy was the guy who broke her heart and drove her to have a one-night stand, get pregnant and become known as the nation’s “First Slut.” You know, that whole little thing. He’s really cute and charming, though. I would have been pretty heartbroken myself.

In the end, this family is a dysfunctional, emotional mess left celebrating small victories while their personal lives are crumbling. But in the empty gala tent they have one another, and that seems to be enough.

1600 Penn introduces a new first family
1600 Penn recap: The Skiplantic Ocean
Celebrity moms who do it all