The immortals of Mystic Falls are back and in a desperate search for the cure. These vampires are willing to do anything to find it — including kill one another. 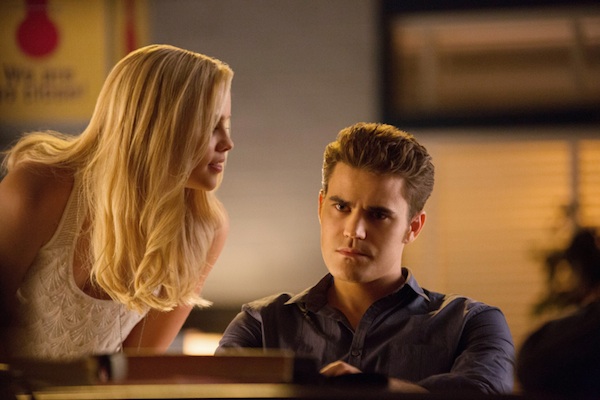 No one really dies on this show. Ever. Except maybe the mayor. But other than that, it doesn’t matter if you’re stabbed in the heart, tortured, burned alive or exposed to UV rays — no one knows how to stay dead in Mystic Falls. I’m still expecting Pastor Young and the council he set on fire to rise again. But at the same time, everyone’s always exerting a lot of energy to kill someone. I’m not sure this is the most productive use of their time.

Rebekah (Claire Holt) is back with one goal in mind: find the cure. In fact, that’s everyone’s mission. It’s kind of shaping up to be a Smokin’ Aces or Snatch kind of season. She’s enlisted the help of one of the original vampires, Kol, to torture Professor Shane for some answers.

But Bonnie has worked some of her magic to protect Shane. The spell somehow links Shane to April so that as he’s getting drowned and tortured, April feels it all too. So she lingers on the brink of death until Stefan (Paul Wesley) comes along and shares his blood with her and saves her.

Even though he tries to play the role of a tight-lipped POW, Shane does let a few things slip. He admits that he caused the council explosion and is channeling all the death energy to perform “expression” magic. Weirdo. He’s also interested in seeing the warlock Silas return. Shane knows where he’s buried and how to bring him back from the dead (surprise, surprise). But this is a problem and Kol is like, “Oh, hell no.” So he kills Shane.

But wait for it… Shane isn’t really dead! Was he protected by Bonnie’s magical powers or is he possibly a vampire?

Elena (Nina Dobrev) is still in love with Damon (Ian Somerhalder). Damon’s still acting like a jerk. Stefan is still butt-hurt about the whole thing. Damon and Klaus are training Jeremy and trying to get him to kill more vampires so he can finish the Hunter’s Map. And more important than anything else: everyone seriously, seriously wants the cure.