If Jessica Chastain isn’t feeling like she’s on top of the world right now, we want to know why: The actress is having an exceptionally good winter. 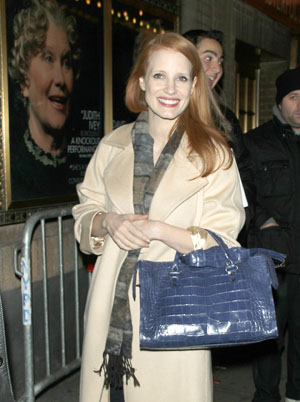 Dear Jessica Chastain: You are officially invited to sit at the cool table in your high school’s cafeteria, because you are having the best week imaginable.

In one short week, Chastain has won a Golden Globe (Best Actress in a Drama), been nominated for an Oscar (Actress in a Leading Role), her movie Zero Dark Thirty is on top of the box office charts, she’s in a Broadway play (The Heiress) that’s getting good notices, and new film, Mama, opens today and the film and Chastain are getting excellent reviews.

Chastain told Today, um, today, that she’s so excited to win the Globe after years of toiling in actor obscurity that, “A friend of mine told me I should just walk around with [the Golden Globe award] leading me.”

Mama is a bit of a departure for the actress, who covers up her signature red hair with a dark wig and plays a rebel. That’s the point, Chastain said.

“I realized immediately I was getting typecast as the perfect mother, the perfect devoted wife, and the stubborn person in me was like ‘You cannot put me in a box! You can’t typecast me! I’m going to play a guitarist in a punk band who’s selfish and doesn’t like kids!'”

“Of course, hordes of horror-loving teens, who don’t care much about awards prestige, will likely make up the most substantial part of the audience, and in 2,647 theaters, Mama could scare up just more than $20 million in its first four days,” EW said.

Critical reviews of Mama have mostly been complimentary. The San Francisco Chronicle reviewer wrote, “‘Mama’ is skillfully made, and although Chastain is the best thing in it, she’s not the only thing in it.”

Entertainment Weekly called Chastain “soulful” and said she helps the viewer “care about what’s scaring you.”

Will two Chastain films be on top of the charts after the weekend? Only time will tell.