Sharon Osbourne’s fire incident has left the host of The Talk shaken. After waking early Thursday morning to find a blaze inside her Beverly Hills home, the wife of Ozzy Osbourne has a serious message for all to hear. 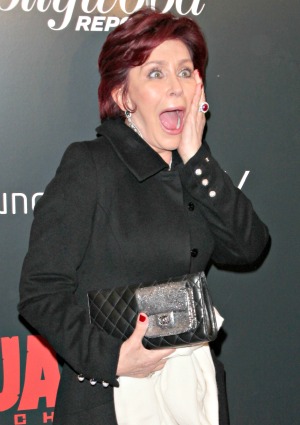 Sharon Osbourne‘s fire story is no laughing matter, though it’s not without its funny moments. The host of The Talk shared the story of her early morning house fire Thursday, explaining a candle she had left burning through the night exploded in its glass vase and sparked a small blaze in their living room.

“At five o’ clock [in the morning], I heard a noise like metal had fallen,” Osbourne said of what alerted her to a problem in the Beverly Hills home she shares with husband Ozzy Osbourne.

“I thought it was my housekeeper coming in and she had dropped her keys on the tiles, that’s what it sounded like, so I didn’t pay any attention. A few minutes later, my eyes are stinging and my throat’s closing up. [I thought], ‘Something’s weird smelling in here.’ Then my dog started to bark. I go downstairs and the whole living room [was on fire]. The candle had burst and the cracking sound was the glass and the candle exploding.”

“My husband had an operation on his hand yesterday so he’s in a complete cast… He comes down and goes, ‘Oh, the fire, the fire!’ [and tries to put it out] with his hand in the cast,” she continued. “Then he opens the French doors and I go into the kitchen and throw water on it and it erupted.”

Mrs. Osbourne insisted “everybody is fine,” but it doesn’t sound entirely like that’s the case!

She elaborated on the rocker’s injuries, saying, “Ozzy‘s front of his hair from (his ear down is), gone! His eyebrows (are gone)… he’s got like, skinned cheeks. We are, like, two idiots, it was like The Three Stooges… Everything you are not meant to do — go to bed with candles alight, open the doors and put water on — we did it all.”

“[The firemen] come up, they give us a lecture, and Ozzy’s like, ‘She’s been doing this to me for 32 years! You tell her, you tell her, no more candles!'”

This time, the lesson has been taken to heart.

“I apologize to my husband because he put himself out,” the 60-year-old added contritely.” He made his hand worse, it started to bleed, the whole nine yards, and I’m sorry and I love you and I will never light a candle again.”

Lady Gaga and the Osbournes battle over bullying >>

Not only has she sworn off candles herself, but Osbourne has a message for everyone out there. She later told TMZ, “Please everybody always check all the candles lit in the house before going to bed. I didn’t, and at 5am this morning I was met with 5 gorgeous men from the BH Fire Department as they put out the fire in my house.”

Are you guilty of Sharon Osbourne’s fire-starting candle habit?